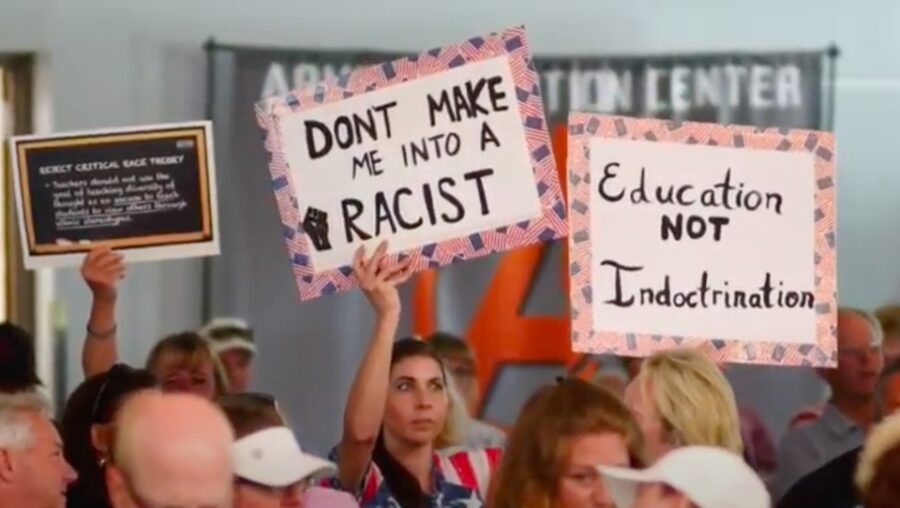 Around seventy lawmakers, lobbyists, and researchers gathered yesterday at the American Legislative Exchange Council’s (ALEC) policy summit in San Diego to hear speakers push actions and model legislation in the GOP’s manufactured culture war over the supposed teaching of critical race theory in public schools, according to documents shared with the Center for Media and Democracy (CMD).

The event was sponsored by the Lynde and Harry Bradley Foundation, a $934.4 million foundation funding right-wing campaigns to influence lawmakers in statehouses across the country. Bradley’s president Rick Graber, who introduced the forum, called Bradley the “cornerstone of conservative philanthropy.”

The Bradley Foundation’s $3.9 million in funding to ALEC between 2014 and 2019 makes it the pay-to-play group’s top identifiable donor, CMD reported.

Speakers at the Bradley Forum, all Foundation grantees, included: Garrett Ballengee, senior policy and research analyst at the Cardinal Institute; Jonathan Butcher, education fellow at The Heritage Foundation; Lance Izumi, senior director for education at the Pacific Research Institute; Libby Sobic, director of education policy at the Wisconsin Institute for Law & Liberty (WILL); and Jim Copland, director of legal policy at the Manhattan Institute.

Bradley’s grantees and ALEC have led a national disinformation campaign to frame the factual teaching of racism in public K-12 schools as critical race theory (CRT) in order to make it a racial wedge issue. CRT is, however, a college-level academic framework that is not taught in public schools. It examines how racism is intertwined in American law and institutions, and argues that systemic racism results in unequal opportunities for people of color.

“The Republican operatives…are effectively debating themselves,” writes Prof. Ibram X. Kendi, director of the Boston University Center for Antiracist Research. “They have conjured an imagined monster to scare the American people and project themselves as the nation’s defenders from that fictional monster.”

Republicans credit the controversy around CRT for electing their candidates for governor, lieutenant governor, and attorney general in Virginia last month. Shortly after that election, Republican Study Committee Chairman Rep. Jim Banks (R-IN) wrote to committee members, saying “the concerns of parents need to be a tier 1 policy issue for Republicans” in a letter titled “Lessons from Virginia,” sourced to CMD by researcher Brent Allpress.

At the forum, Butcher said CRT “absolutely will” play as big a role in the midterms as it did in Virginia, falsely claiming that the National Education Association said that CRT would remain in the classroom and that CRT characterizes people as racist.

Manhattan Institute’s Copeland pushed “A Model for Transparency in School Training and Curriculum” that he co-wrote with colleagues Christopher Rufo and John Ketcham. At its December 2020 summit, ALEC hosted a workshop, “Against Critical Race Theory’s Onslaught” that featured Rufo, who has been credited with inventing the controversy.

The bill requires that all curriculum materials be posted on a school website or another accessible location.

Copeland argued that, “transparency should be at the forefront this year.”

WILL’s Sobic used the forum to falsely claim that “critical race theory was abundant across our school districts” in Wisconsin and promoted a similar Goldwater Institute model, the “Academic Transparency Act.” The Wisconsin legislature recently passed a version of that now sits on Gov. Tony Evers’ (D) desk.

Copeland stressed in his talk that obtaining greater transparency is a key component of this effort, as parents will push back if they are aware of what is taught in schools.

On Dec. 2, the same day of the forum, the Manhattan Institute and the Heritage Foundation published a letter calling on “state legislators to enact policies that families and students desperately need to reject the racial prejudice inherent in Critical Race Theory, maximize transparency around what is taught in K-12 classrooms, and secure education choice.”

Butcher pushed Heritage’s model, “Protecting K–12 Students from Discrimination,” which prohibits schools from compelling students to affirm, adopt, or adhere to a long list of broad concepts and to strip schools found in violation of their state funding.

Butcher mischaracterized CRT at the forum, telling the audience “that Critical Race Theory is a neo Marxist philosophy that believes that racial discrimination is appropriate and can be used and applied in K12 schools.”

Sobic also revealed at the forum that WILL is developing a “Parental Rights Handbook” for parents who feel thwarted by school boards and the state, saying that WILL is “focused on helping parents push back using existing state and federal laws.”