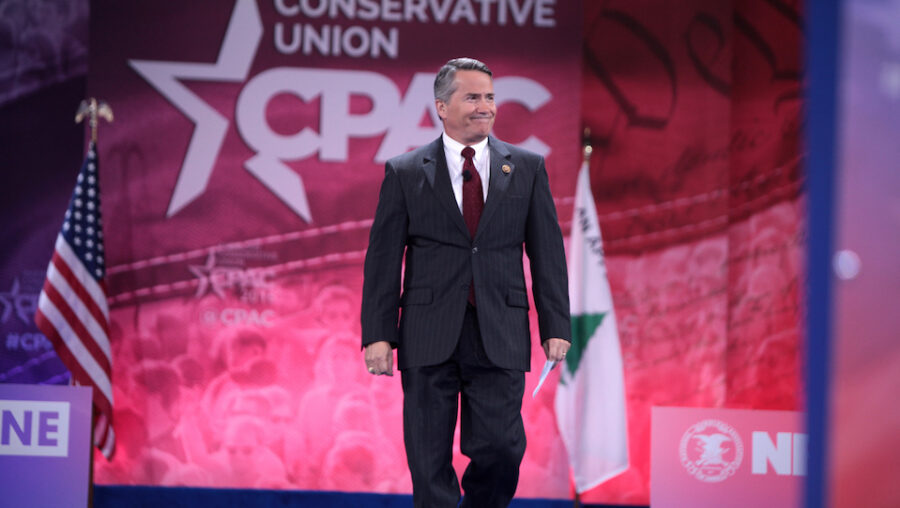 When Georgia Congressman Jody Hice joined with 125 other House Republicans to overturn the 2020 election results, he hadn’t yet announced a change of course in his political ambitions. But just two months after the Jan. 6 riot at the Capitol and that unconscionable vote, his unbridled support of the Big Lie won him Trump’s endorsement to leave Congress and run for secretary of state in Georgia instead.

Since then Hice’s bid to replace the incumbent, Brad Raffensperger – a Republican who famously refused to “find” enough votes to swing the election in the former president’s favor – has opened the floodgates to pro-Trump campaign cash from out of state. At this point in the race, he has accrued an almost three-to-one fundraising advantage over Raffensperger.

This advantage is also pushing Hice ahead of the other leading candidate in the May 24 GOP primary: former Alpharetta mayor David Belle Isle. Even though his entire campaign is also based on claims of voter fraud in the 2020 presidential election, Belle Isle is falling behind the former president’s top pick.

Trump clearly cares about who wins as secretary of state in this swing state because the office certifies voting devices, candidates, and election results. His endorsement in Georgia and other key secretary of state races across the country is transforming once-obscure down-ballot elections typically funded by local contributions into races of national significance influenced by out-of-state money.

In reviewing campaign finance records from Georgia for 2021 and Jan. 2022, the Center for Media and Democracy found that Belle Isle raised $376,000 but received only two donations (for $9,000 from each) from outside the state. By contrast, Hice has raised a total of  $1.6 million since Trump endorsed him in March 2021, including $420,000 from out-of-state donors, according to the Brennan Center for Justice.

Two of these donations confirm Hice’s national appeal: one for $7,000 from Illinois-based businessman Richard Uihlein, a leading funder of super PACs at the federal level, and a $5,000 contribution from right-wing Arkansas businessman Ron Cameron, who has already donated $3.2 million to outside groups for this year’s federal elections. In addition, the congressman has $187,000 in his congressional campaign warchest, which could be transferred to a separate state PAC and used for his secretary of state race, according to the Georgia Government Transparency & Campaign Finance Commission.

Raffensperger received virtually no funding from outside of Georgia when he first ran in 2017 – at a time when neither the race nor the office commanded national interest. This election cycle he is being squeezed by two competing forces: repudiation from Trump loyalists and only limited support from out-of-state Democrats, who are more interested in backing Georgia state Rep. Bee Nguyen, the Democratic primary frontrunner for secretary of state.

So far Raffensperger has received only $597,000 in campaign contributions, with just over $100,000 from out-of-state donors. Once Nguyen emerged as a competitive contender in the race, state and national contributions from Democrats began flowing to her instead of Raffensperger, resulting in a total of $1.1 million raised by her campaign through Jan. 2022, with $308,000 from other states.

The Trump endorsement effect is also impacting the secretary of state race in Arizona, where Mark Finchem has raised $663,000 from thousands of donors – two-thirds of whom live out of state – since winning the endorsement in April 2021.

It remains to be seen whether or not Trump’s endorsements translate to victory in GOP primaries. But so far the state candidates he endorses are having no trouble bringing in big bucks from out-of-state donors throughout the country.