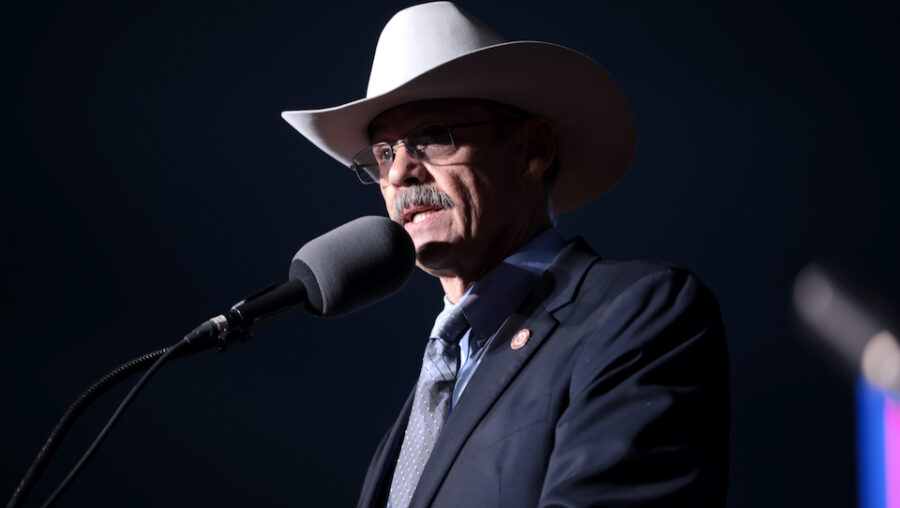 The fundraising power of a Trump endorsement for the 2022 elections was on full display last Friday, when state Rep. Mark Finchem, a candidate in the GOP primary for Arizona secretary of state, reported raising $663,000 from more than 11,000 small contributions since April 2021.

While Finchem’s leading primary opponent, Edward “Beau” Lane outraised him slightly with $716,000, almost all of that money came from big donors, with less than $3,000 from contributions of $100 or less.

The campaign filings for the Arizona secretary of state GOP primary on Aug. 2, 2022, provide the first glimpse of the financial impact of Trump’s endorsements of candidates who deny that Joe Biden won the 2020 election and spread Trump’s Big Lie of widespread voter fraud.

The office is currently held by Karen Hobbs (D), who is running for governor and has been a leading target of Trump’s ire. Last July, Hobbs requested that the state attorney general open a criminal investigation into whether Trump attempted to interfere with the lawful tallying of Arizona’s 2020 ballots.

The secretary of state is important to Trump if he runs again because the office certifies voting devices, candidates, and election results.

Finchem, who is backed by Trump, helped coordinate the “Stop the Steal” rally that preceded the Jan. 6 Capitol riot and was originally listed as a speaker. He was also involved in the submission of a fake pro-Trump slate of electors and has aggressively promoted Trump’s voter fraud lies.

The Associated Press found fewer than 475 cases of voter fraud in the six battleground states during the 2020 elections, a number that would have not changed the election results.

In his endorsement statement, Trump lauded Finchem’s “incredibly powerful stance on the massive Voter Fraud that took place in the 2020 Presidential Election Scam.”

Finchem signed a Jan. 5, 2021, letter to Pence asking him to not certify election results, and the Trump campaign paid him $6,037 for “legal consulting,” even though he is not a lawyer.

Finchem has refused to hand over emails and text messages from his  Washington, D.C. trip for the insurrection to The Arizona Republic, stating through a lawyer that, “the threat of criminal prosecution gives rise to certain Constitutional rights that may overcome the duty to disclose otherwise public documents under Arizona’s public records law.”

A hand count of ballots by the Arizona Secretary of State, and later an outside audit paid for by five pro-Trump groups, both showed the Biden victory margin to be accurate.

Also running against Finchem in the primary are state Rep. Shawnna Bolick, who raised $157,000, and state Sen. Michele Ugenti-Rita, who brought in $94,000.

A right-wing pay-to-play operation that brings lobbyists and legislators together behind closed doors to craft legislation, ALEC has extensive ties to the Jan. 6 insurrection and is actively working with the dark money Honest Elections Project to move voter suppression legislation in the states.

Bolick sponsored radical legislation in last year’s legislative session to allow the Arizona legislature to overturn presidential election results and choose its own electors. The bill, HB 2720 died in committee, but Bolick is expected to re-introduce it this year.

Bolick also signed the Jan. 5 letter to Pence asking him to not certify election results.

Her husband, Clint Bolick, is an Arizona Supreme Court justice. Before being named to the bench by Gov. Doug Ducey (R), he was vice president for litigation of Arizona’s Goldwater Institute, a member of the right-wing State Policy Network (SPN), and a research fellow with the Hoover Institution. He co-founded the Institute for Justice and was president of the Alliance for School Choice.

Finchem and Bolick both sponsored HB 2905, signed by the governor in July, which makes it a Class 5 felony for a county election supervisor to deliver an early voting ballot to any person who did not request one.

Finchem’s other opponent, Michele Ugenti-Rita, is a state senator and chair of the Senate Government Committee, where she has championed restrictive voting laws. However, she was booed off the stage at a June 2021 Trump rally when she denounced the Cyber Ninjas’ partisan election audit as “botched.”

In the Democratic primary for secretary of state, the two major candidates are state Rep. Reginald Bolding and, Adrian Fontes, who was until recently Recorder of Maricopa County, which includes Phoenix.

The 2021 Arizona campaign finance report for 2021 came the same week as news reports that 11 prominent Arizona Republicans signed a document sent to the U.S. Congress, with backing from the state GOP, claiming that they were the rightful presidential electors from Arizona, even though Joe Biden beat Donald Trump by 10,500 votes, and all of the state’s 11 electoral votes were legally cast for Biden.

Arizona Governor Ducey had already sent the list of Biden electors to the Congress and the fake Trump slate was rejected.

The action by the GOP, which also occurred in at least six other states, is under investigation by the U.S. House select committee investigating the Jan. 6 riot at the U.S. Capitol.