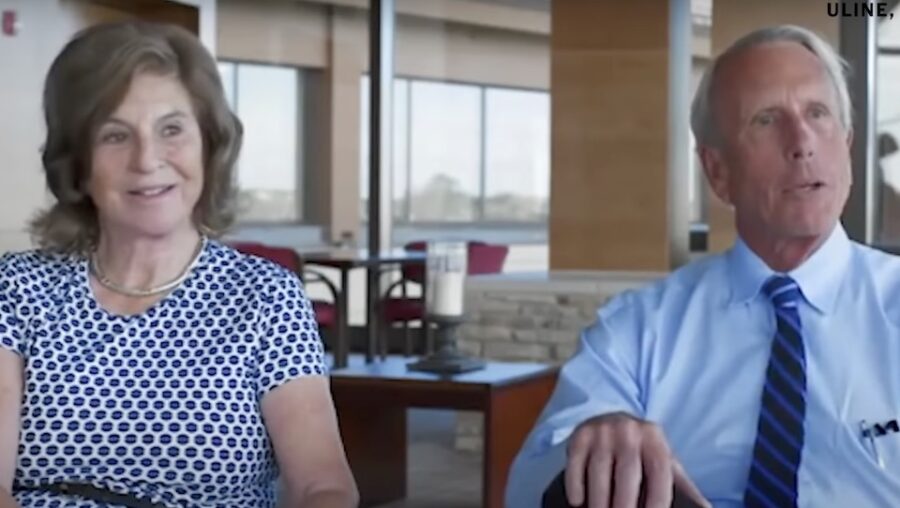 GOP megadonor Richard Uihlein gave his Restoration PAC more than $2.7 million between April and June, a quarterly report filed on Friday disclosed. Uihlein’s PAC then contributed over $2.5 million to three anti-abortion PACs affiliated with Susan B. Anthony Pro-Life America (SBA), a Christian Right extremist group that has worked for decades to overturn Roe v. Wade and is now actively pursuing a total ban on abortion—with no exceptions—nationwide.

Uihlein’s PAC has raised $6.2 million and dispersed $8.3 million so far in 2022. The $2.7 million from Uihlein in the second quarter came in two installments, with another six donors chipping in a total of less than $4,000, according to the filing.

Richard and his wife Elizabeth, who own the privately held Uline shipping and packing company, are among the biggest and most influential donors on the Right. The billionaire couple ranked as the fourth largest donors to super PACs in 2021, according to a Center for Media and Democracy (CMD) analysis of Federal Election Commission (FEC) data. They have also distributed millions in grants through the Ed Uihlein Family Foundation to support right-wing infrastructure.

Uihlein has spent $29.5 million so far in this election cycle, making him the top donor to Republican efforts nationally, OpenSecrets reports. He is also a major funder of Club for Growth and gave $9 million to help Darren Bailey, a far-right state senator endorsed by former President Trump, win the GOP primary in the Illinois governor’s race.

Restoration PAC disclosed $1.25 million in contributions to the American Principles PAC (APP) in the second quarter, on top of the $650,000 it gave APP in the first quarter.

Frank Cannon, a longtime political strategist for SBA, runs APP. In March, CMD exposed his strategy for improving Republicans’ chances to win big in the November midterms, which he divulged at the February meeting of the Council for National Policy (CNP).

Having raised close to $2 million so far in 2022, APP has placed ads in Republican primaries highlighting candidates’ positions on abortion, critical race theory, and transgender rights.

In Michigan, the PAC is supporting John Gibbs, former assistant secretary of Housing and Urban Development for Community Planning and Development during the Trump administration, in his congressional bid to unseat U.S. Rep. Peter Meijer (R-Mich.). APP touts Gibbs as a Representative who will “protect our kids from transgender ideology, anti-American Critical Race Theory, and keep boys out of our girls’ sports.”

Restoration PAC gave $846,515 in the second quarter to Election Integrity PAC, a newly launched effort run by Jennifer Gross, vice president of administration for SBA, according to its June report filed with the FEC. The filing shows that this year Restoration PAC is the sole funder of the group, which in turn funneled $50,000 to the Republican State Leadership Committee (RSLC).

Together, RSLC and its strategic policy partner, the State Government Leadership Foundation, have raised $53.1 million to date in the 2022 election cycle.

SBA’s Women Speak Out PAC received $437,778 from Restoration PAC in the second quarter, on top of the $219,000 it received in the first quarter. It has raised a total of $2.4 million so far this year, according to its June filing. The PAC is targeting “persuadable voters in 8 states this cycle to encourage them to vote for life,” its website states.

SBA’s PAC recently announced its support of Mehmet Oz, the Republican candidate for U.S. Senate in Pennsylvania, after initially backing Kathy Barnette in the primary. Dr. Oz’s race against Lt. Gov. John Fetterman (D) for the open senate seat is expected to be one of the most hotly contested in the country this fall.

Women Speak Out PAC is ready to spend $2.3 million “to educate voters in Pennsylvania about the extreme pro-abortion record of candidates like Fetterman.” The lieutenant governor is on record as believing that the “right to an abortion is non-negotiable” and that Democrats should abolish the filibuster in order to pass federal legislation protecting a woman’s right to choose in every state.

“To deliver pro-life victories and defeat pro-abortion extremism at the ballot box this year, the SBA Pro-Life America and Women Speak Out PAC ground team is working to reach eight million voters across battleground states—four million directly at their doors—to take back the U.S. House and Senate,” wrote Marjorie Dannenfelser, president of Susan B. Anthony Pro-Life America.