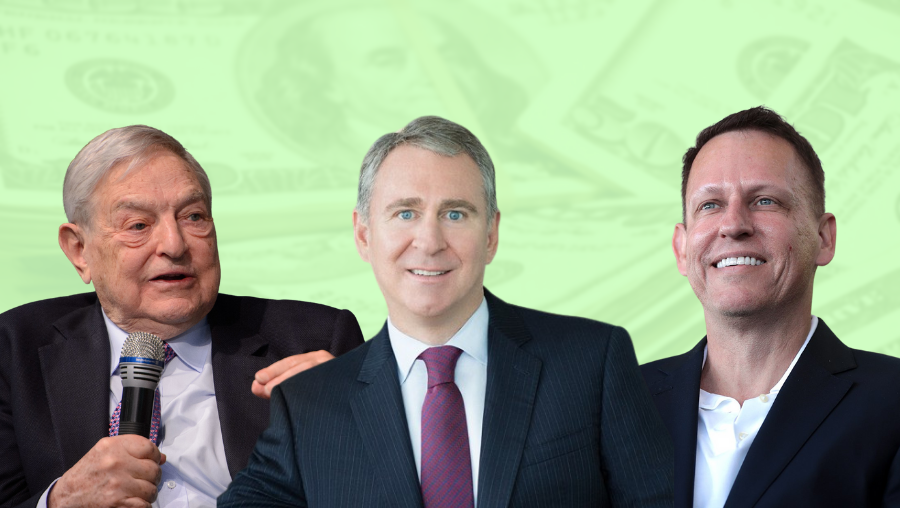 With a 50-50 split in the U.S. Senate and a thin majority for Democrats in the House, huge amounts of money are pouring into this year’s congressional races as both major parties vie for control of Congress. Twelve years after the Supreme Court’s Citizens United decision unleashed unlimited amounts of corporate spending on federal campaigns, a record amount of money is likely to flow into the midterms.

Billionaires who amassed their wealth as executives in the financial, manufacturing, and tech industries donated huge sums of money to super PACs in 2021, led by a staggering nine-figure sum from liberal George Soros. Several conservative business owners and executives also gave big, but in the tens of millions, according to recently released Federal Election Commission data reviewed by the Center for Media and Democracy (CMD).

Hedge fund manager George Soros, who is worth an estimated $8.6 billion, gave an eye-popping $125 million to his Democracy PAC II, which supports pro-democracy “causes and candidates, regardless of political party” committed to “strengthening the infrastructure of American democracy: voting rights and civic participation, civil rights and liberties, and the rule of law,” according to a statement obtained by Politico.

The $125 million is a long-term investment that will support these causes beyond the 2022 midterms. Last year, Democracy PAC II contributed large amounts to liberal committees such as House Majority PAC, Democrats’ main House super PAC; BlackPAC, which mobilizes Black voters; and Workers Vote, a super PAC affiliated with the Unite Here labor union.

In addition to being a reliable megadonor to the Democratic Party, Soros has also made significant commitments to racial justice organizations such as Color of Change and helped elect progressive district attorneys in an effort to reform the criminal justice system.

Worth $25.5 billion, Ken Griffin is the founder and CEO of the hedge fund and financial services company Citadel and the richest resident of Illinois. The finance titan, who was the fifth-biggest federal elections contributor of the 2020 cycle ($67.4 million), has already doled out $21.5 million to conservative super PACs, $11 million of which went to House Republicans’ main super PAC, Congressional Leadership Fund. Griffin gave $5 million each to the Senate GOP’s super PAC, Senate Leadership Fund, and Honor Pennsylvania, which is supporting Senate candidate Dave McCormick (R-Penn.), a hedge fund executive who worked in the George W. Bush administration, in the primary election. He donated $500,000 to American Patriots PAC, which is funded almost exclusively by Republican finance executives.

Griffin has also donated a huge amount of money to individual campaigns. In Illinois, where the the cap on individual contributions is lifted if a candidate in the race self-funds at the $250,000 limit, he gave $20 million to Richard Irvin, a Republican who is running to oust Democratic Gov. J. B. Pritzker, a billionaire. He gave $5 million to the re-election campaign of Florida Gov. Ron DeSantis.

Tech mogul Peter Thiel, a major Trump supporter who is worth $4.9 billion, made huge donations to support his business associates’ Senate campaigns.

In 2021, Thiel gave $10 million to Saving Arizona PAC, a new super PAC supporting his ally Blake Masters, the chief operating officer of Thiel Capital and president of the Thiel Foundation, in his Senate bid against incumbent Mark Kelly (D-Ariz.). Thiel donated another $10 million to Protect Ohio Values, a single-candidate super PAC supporting Hillbilly Elegy author and venture capitalist J.D. Vance, the cofounder of Narya Capital, in which Thiel is an investor. In 2020, he and Narya Capital made a large investment in Rumble, an unmoderated, right-wing alternative to YouTube that is riddled with misinformation, conspiracy theories and far-right extremism. Protect Ohio Values has already spent $3.7 million backing Vance.

In addition, Thiel gave $250,000 to Save Missouri Values, the super PAC behind state Attorney General Eric Schmitt’s gubernatorial campaign, making him among its biggest donors.

Illinois-based Uline founder Richard Uihlein and his wife, Liz, continued their generous donations to right-wing super PACs last year. The multibillionaire Trump supporters, who are fans of far-right, anti-establishment candidates, dished out over $17.3 million to nine super PACs in 2021.

Richard Uihlein donated the most to Club for Growth Action but also gave large sums to seven other super PACs:

In addition to his personal donations, Uihlein’s Restoration PAC and affiliated Restoration Action gave millions to America’s PAC and $425,000 to the Susan B. Anthony List’s Women Speak Out PAC.

CMD revealed that Richard Uihlein is the biggest known funder of the Tea Party Patriots, which helped organize the Jan. 6 rally and march that led to the Capitol insurrection, and The Federalist, a right-wing website that often publishes misinformation and until recently kept its donors secret.

The Uihleins have also bankrolled Republican party organizations and leadership committees with $12 million so far. Richard Uihlein donated $1 million to Illinois state Sen. Darren Bailey, another Republican vying for the governorship, and gave the maximum allowed donation to the campaign of U.S. Rep. Jody Hice (R), a top purveyor of the Big Lie whom Trump has endorsed for secretary of state in Georgia.

School Freedom Fund is a new super PAC affiliated with Club for Growth and entirely funded by Yass. The super PAC, which first registered with the FEC in November 2021, has not reported any independent expenditures yet.

Yass is also the biggest donor to Term Limits SuperPAC, which most recently spent money attacking Democratic Senate candidates in 2018. Other significant donors to the super PAC are Daniel Rich of Warwick, N.Y. and Joseph Rich of Philadelphia, who together gave $1.3 million through their trusts and also donated to Club for Growth Action.

In the last election cycle, Uihlein and Yass were the biggest funders of Club for Growth Action, which spent money to elect 42 GOP members of Congress who attempted to invalidate Biden’s victory.

Chicago-based insurance executive Patrick G. Ryan, worth $7.8 billion, gave $10 million to the Congressional Leadership Fund last September, as well as large donations to state and national Republican groups. In 2020, the founder of the insurance giant Aon gave millions of dollars to Charles Koch-funded Americans for Prosperity Action and super PACs supporting GOP Senate candidates in Georgia and Michigan. He also spent $1 million in 2020 opposing a graduated income tax in Illinois backed by the Democratic governor.

In 2020, he was the 16th-biggest donor to federal outside spending groups.

Larry Ellison, the chairman of Texas-based Oracle, is worth $102 billion and gave $5 million to Opportunity Matters Fund, a conservative super PAC that spent heavily in support of GOP Senate candidates in 2020, when he also gave $5 million to the PAC. In the current election cycle, Opportunities Matter Fund is supporting Sen. Tim Scott (R-S.C.), and Ellison donated $15 million more to the super PAC in early 2022. In 2021, the group reported spending nearly $480,000 backing Republican Wesley Hunt, who is running for a congressional seat representing a district near Houston.

Among the other biggest super PAC donors in 2021:

Missing from the super PAC donors so far is Miriam Adelson, who, with her late husband, Sheldon, doled out a record $173 million to outside spending groups during the 2020 cycle.

Unions were also major players. The United Brotherhood of Carpenters and Joiners gave more than any other organization, donating nearly $11.6 million to super PAC Working for Working Americans’ federal and nonfederal accounts. The National Education Association ($7 million) and groups connected to the SEIU ($5.2 million) gave large sums to liberal super PACs in 2021.

Methodology: CMD downloaded itemized and unitemized Federal Election Commission data and analyzed thousands of super PAC donations of $10,000 or more from 2021, which totaled over $660 million.