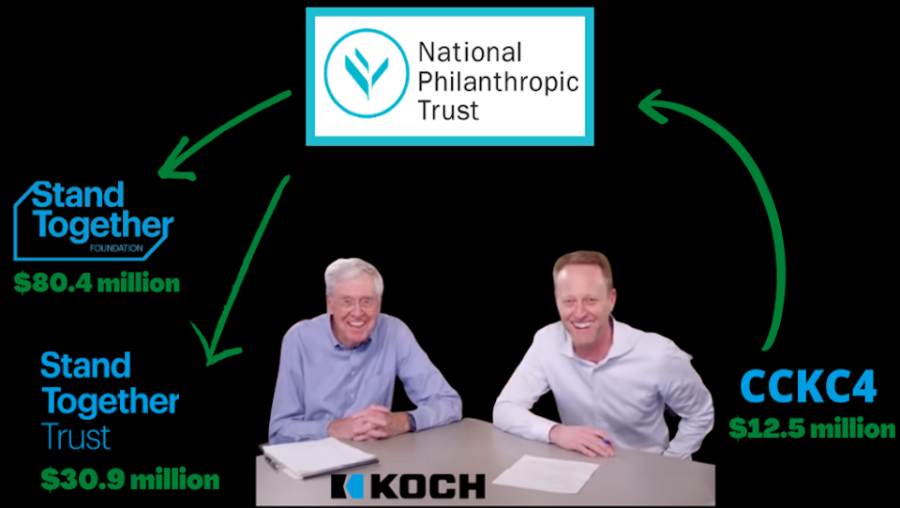 The National Philanthropic Trust helped Charles Koch’s tightly controlled network of nonprofits shield close to $100 million in donations and grants from public view between 2019 and 2021.

The Center for Media and Democracy (CMD) recently reported on the network’s 2019–20 finances, which ballooned to $2.2 billion in revenues in 2020, and the emergence of Chase Koch’s CCKC4 as a potentially major player on the U.S. political scene.

Despite receiving $1.2 billion in 2020, CCKC4 only disclosed making a single grant of $12.5 million to the National Philanthropic Trust (NPT). A massive donor-advised fund—independent from the Koch family—the NPT routes billions of dollars to thousands of charities, policy organizations, and nonprofits every year.

The NPT does not disclose its donors nor their designated recipients, an advantage it advertises to potential donors. While it does disclose the organizations it finances and some of its donors voluntarily disclose payments to the NPT, the information available makes it impossible to draw a line between specific donors and grantees.

This appears to be part of a recent trend. Corporate mega-donors use donor advised funds to anonymize funding to groups that influence policy making, including longtime climate change denial organizations with a history of support from the Koch family’s foundations.

CMD contacted a Koch Industries executive who serves as director of several of Charles Koch’s nonprofits for comment, but received no response.

“Having a 501(c)(4) make grants to a 501(c)(3) charity such as the Charles Koch Foundation or the National Philanthropic Trust is tax inefficient, as the 501(c)(4) is already exempt from tax and so does not need a charitable contribution deduction,” said Lloyd Hitoshi Mayer, a professor at the University of Notre Dame Law School. But “if the original, individual funder of the 501(c)(4) has already maxed out their charitable contribution deduction,” he added, “then it does not matter if they make a gift directly to a 501(c)(3) or have the 501(c)(4) do it instead.”

In recent years, the NPT also made major anonymous grants to two other organizations controlled by the Koch family.

One of those groups, Stand Together Trust, is central to Koch’s policy influence operation. Run by the Kochs and Koch Industries, it funds “social entrepreneurs” in education and a variety of public policy areas, and provides major financial support for Americans for Prosperity, Koch’s astroturf political advocacy group.

Annual grants from NPT to Stand Together Trust have soared from $1.05 million in 2019 to $9.75 million in 2020 and $20.15 million in 2021, according to a recent IRS filing obtained by CMD and previous filings compiled by ProPublica.

Another of Charles Koch’s organizations, the Stand Together Foundation, received more than $80 million from NPT between July 2019 and June 2021.

This philanthropic organization is focused on anti-poverty initiatives, but also serves to amplify Charles Koch’s free-market ideology. Virtually every grantee of the Foundation appears to be required to complete an “intensive six-month training designed to coach nonprofit leaders on business principles.” Called the Catalyst Program, it promulgates his trademarked business management philosophy, “Market-Based Management.”

For the first eight decades of his life, Charles Koch was generally averse to charity. He preferred to send the vast majority of his “philanthropic” donations to political organizations that would advance his ideological and business interests, as Jane Mayer points out in her 2016 book Dark Money (pp. 147–148).

The Stand Together Foundation emerged publicly in 2015 as part of a public relations makeover in the wake of a decade of sustained public criticism of the Koch brothers’ business and political pursuits. Koch Industries was best known for its pollution, its support for climate change denial, its alleged theft of oil from the Osage Nation, and its pervasive political influence.

The rebrand appears to be working. In the past five years, Charles Koch and his staff have managed partnerships with musicians like Snoop Dogg and Guns ‘N’ Roses drummer Matt Sorum. Celebrity athletes have also participated. Koch’s “Prime 5” collaboration involved retired football player Deion Sanders, and the LeBron James Family Foundation received a $575,000 grant from Koch’s Stand Together Chamber of Commerce in 2020. Charles Koch touts his collaboration with former political foe Van Jones, who allegedly thinks of his primary contact at Koch “like a brother.“

In sharp contrast, Koch’s historical political extremism—dating back to his work with the John Birch Society during the height of the Civil Rights Movement in the 1960s—continues unabated.

The Bill of Rights Institute, an organization operating out of Koch’s compound in Arlington, Virginia, was involved in efforts to whitewash the history of slavery in the U.S. in its lesson plans. Koch cash flowed to members of a network of neo-Confederates and white supremacists as recently as 2017. Since then, he has continued to support groups that manufacture hysteria over critical race theory, despite his public statements disavowing the trend.

Most recently, the Atlantic Council ceased its $4.5 million collaboration with the Charles Koch Institute after new staff hired from the Koch-founded Cato Institute advocated against focusing on Russia’s violations of human rights. This followed Koch Industries’ controversial refusal to discontinue its business operations in Russia immediately after Vladimir Putin ordered the invasion of Ukraine in February. By April, the company reversed its position following weeks of dogged investigations by journalist Judd Legum.

Still, many journalists seem less interested in scrutinizing Charles Koch’s controversial activities than they were during the Obama presidency. Whether or not his rebranding efforts have won over the media and the public, Charles Koch’s political operation and his influence continue to grow and spread as fast as his fortune.