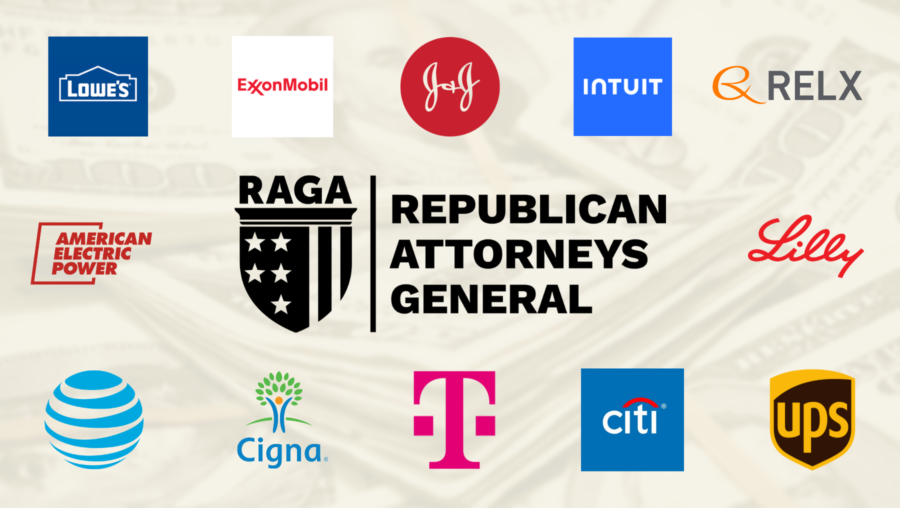 A Center for Media and Democracy (CMD) investigation has identified more than two dozen major U.S. companies that are publicly committed to environmental, social, and governance (ESG) principles yet have recently donated large amounts of campaign cash to a group of Republican state attorneys general that is hyper-focused on eroding air and water regulations, promoting fossil fuel companies, and using state governments to punish companies that try to limit their climate-related risks by divesting from oil, gas, and coal.

Republican attorneys general, along with fellow GOP governors and state financial officers, are weaponizing their public offices to prevent action on climate change. Their latest efforts seek to bar companies that divest from fossil fuels or employ other ESG principles from receiving government contracts.

And yet large U.S. companies such as AT&T, Cigna, Citigroup, Lowe’s, Pfizer, T-Mobile, and UPS—all of which publicly promote their commitment to ESG—have recently funded the political prosperity of these Republican AGs.

“Climate change is one of the most pressing global challenges,” the multinational brewing company Anheuser-Busch InBev (AB InBev) acknowledges in its 2021 ESG report for investors. “Our evolved understanding of potential climate-related risks and opportunities across our value chain continues to inform our long-term strategy.”

AB InBev has set an ambitious climate goal for 2025, aiming to reduce its carbon emissions by 25% and purchase 100% of its electricity from renewable sources by then. In joining the international RE100 initiative to switch to 100% renewables, the company intends to achieve net zero greenhouse gas emissions by 2040.

But the beer giant is one of the largest corporate funders of the Republican Attorneys General Association (RAGA), a group of powerful state officials that has long attacked environmental regulations in the U.S. Members of RAGA—which receives substantial funding from fossil fuel companies to support the reelection campaigns of these AGs—have filed legal challenges against Obama-era air and water pollution regulations. Former Oklahoma AG Scott Pruitt is among those who have worked directly with fossil fuel lobbyists to challenge these laws.

Numerous other corporations have given large sums to RAGA for this year’s elections while publicly committing to ESG principles and, in many cases, to direct climate action.

RAGA recently scored a big win in West Virginia v. EPA when the right-wing justices who now dominate the Supreme Court ruled against the agency, preventing the Biden administration from regulating greenhouse gas emissions under the Clean Air Act without going back to Congress for explicit authorization.

As the Right gets more extreme in the U.S., climate-denying Republicans have added a new weapon to their arsenal: attacking financial firms that decrease their investments in fossil fuels.

GOP attorneys general and financial officers are joining state lawmakers in penalizing investment firms that divest from fossil fuel companies. Although they are members of a political party ostensibly committed to a free market, these GOP officials are meddling in corporate decision-making by trying to prevent executives from limiting the enormous financial risk posed by the effects of climate change—likely the biggest economic challenge of the century.

As with their outcry about critical race theory supposedly being taught in American schools, GOP politicians are attempting to cast climate action as a culture war issue, branding routine practices such as ESG disclosures to investors and divesting from a waning fossil fuel industry as “woke.”

In 2021, Texas enacted a law to root out alleged “energy discrimination,” seeking to prevent investment firms that decrease their stakes in oil, gas, and coal from managing the state’s pension and other funds. After the law passed, the energy task force of the ultra-conservative, corporate-funded American Legislative Exchange Council (ALEC) approved a model bill with similar language, directing state treasurers or comptrollers to maintain a list of firms that have divested from fossil fuels and to only issue government contracts to businesses with more than 10 employees that verify their allegiance to fossil fuels.

In the past year or so, similar legislation has been introduced in at least 15 states and has already passed in four. On Aug. 24, Texas released its first list of firms that allegedly “boycott energy companies,” including BlackRock, Credit Suisse, and UBS.

Claims like this are histrionic and often baseless. For example, BlackRock has invested more than $108 billion in Texas-based energy companies, and this year it plans to support proportionally fewer ESG shareholder resolutions than it did last year. And while Texas Attorney General Ken Paxton (R) and his allies from other states claim that ESG investing hurts their pension funds, academic studies like a recent one undertaken by researchers at the University of Pennsylvania and the Federal Reserve Bank of Chicago refute this. In fact, since Texas passed its anti-ESG law last year, the UPenn/Fed study indicates that it has already cost the state between $303 and $532 million, as Kate Aronoff points out in The New Republic.

Other evaluations of ESG investing are mixed, but when researchers from the New York University Stern Center for Sustainable Business and Rockefeller Asset Management analyzed over 1,000 relevant research papers from 2015–20, they found that a majority of the studies indicated ESG investing leads to either neutral or improved financial performance. The meta-analysis points out that “improved financial performance due to ESG becomes more marked over longer time horizons.”

Despite these findings, Republican state AGs and other officials have accelerated their attacks on climate action—a central tenet of ESG investing—in the past few years.

In August, Florida’s Gov. Ron DeSantis (R) and the trustees of the State Board of Administration voted to ban its investment managers from using ESG considerations in managing its portfolio of roughly $245 billion, primarily from the Florida Retirement System Pension Plan. Florida’s AG Ashley Moody (R) joined the governor in supporting the move.

Meanwhile, right-wing entrepreneur Vivek Ramaswamy is cashing in on the GOP’s anti-ESG and anti-woke craze, as CMD recently reported. His firm Strive Asset Management (DRLL) is trying to pull business away from the Big Three asset managers in red states. It recently announced that it has raised $250 million thanks to large investments from far-right tech mogul Peter Thiel and his affiliated groups.

Not only are GOP AGs targeting asset managers that reduce fossil fuel investments, but they’re going after regulators and ratings agencies as well.

In June, Paxton spearheaded a letter from a group of 12 Republican AGs to the Securities and Exchange Commission (SEC) opposing its proposed corporate disclosure requirements around sustainability. The rule would require firms to back up their claims of purportedly green or socially aware investments. Twenty-one GOP AGs sent another letter of opposition to the SEC on Aug. 16.

“The woke left is going full throttle in their mission to change every facet of American life… and erode our democratic institutions to suit their liberal agenda,” said West Virginia’s AG Patrick Morrisey (R).

In late July, Missouri’s AG Eric Schmitt (R) launched an investigation into whether Morningstar, a financial research and rating company, violated a state consumer-protection law by evaluating ESG issues. A few weeks later, 18 other AGs joined the probe. Schmitt and 16 other attorneys general are also trying to block California from setting its own vehicle emissions standards.

At the same time, the nonprofit State Financial Officers Foundation (SFOF) and its members are doing all they can to prop up fossil fuel companies and punish firms that divest from oil, gas, and coal. In West Virginia, state Treasurer Riley Moore told five financial companies—the banks Goldman Sachs, JPMorgan, Morgan Stanley, and Wells Fargo, as well as BlackRock—that they would no longer be eligible for state contracts because they have reduced financing for coal projects.

Few of the nearly 30 companies CMD contacted responded to requests for comment.

American Electric Power (AEP), a largely fossil fuel-powered electric utility, has publicly committed to a decarbonization strategy and made JUST Capital’s list of the top 100 ESG-focused companies in 2022. Despite planning to reach net-zero greenhouse gas emissions by 2050, the company doled out $50,400 to RAGA between 2021 and 2022.

A spokesperson did not directly answer CMD’s questions about why it contributes to a group supporting state attorneys general who have repeatedly fought efforts to mitigate climate change. Instead, the response was that AEP reviews its contributions to RAGA and the Democratic Attorneys General Association (DAGA) every year and “works with leaders from both political parties on issues that affect our ability to deliver reliable and affordable electricity to our customers…. We also talk regularly with our investors and other stakeholders about ESG issues,” the spokesperson explained, “as we work to manage business risks and opportunities and identify emerging trends or issues that could impact our ability to carry out our strategy.”

Pharmaceutical giant Pfizer, which has given nearly $152,000 to RAGA since 2021, claims it is committed to ESG principles, with the internal goal of becoming carbon-neutral by 2030 and a public pledge to go 100% renewable by then, too.

“Our engagement with RAGA has focused mainly on advancing healthcare policies related to patient safety and efforts to combat counterfeit medicines,” a Pfizer spokesperson told CMD.

“Pfizer’s political giving is led by two guiding principles: preserve and further the incentives for innovation, and protect and expand access to medicines and vaccines for the patients we serve. Our contributions to RAGA are based on that criteria alone and are disbursed with the understanding that we are not going to agree with the group on every single issue.”

Mastercard did not directly answer any of CMD’s questions, but a spokesperson said that the company no longer has a relationship with either RAGA or DAGA. It is, however, a gold-level sponsor of SFOF.

Citigroup and Eli Lilly declined to comment, and roughly two-dozen other companies did not respond to CMD’s email requests.

CMD identified the following companies that are both pursuing ESG principles and making donations to RAGA. Many made the 2022 Just 100 List compiled by JUST Capital and/or the Investment Business Daily (IBD) list of 100 Best ESG Companies in 2021. In addition, many signed on to RE100 and/or The Climate Pledge, another initiative to get corporations to commit to net-zero emissions by 2040. Links to ESG information and recent donation amounts to RAGA are indicated below.

CMD’s investigation follows a similar report by the Center for Political Accountability that analyzed companies’ political spending from 2016–20.