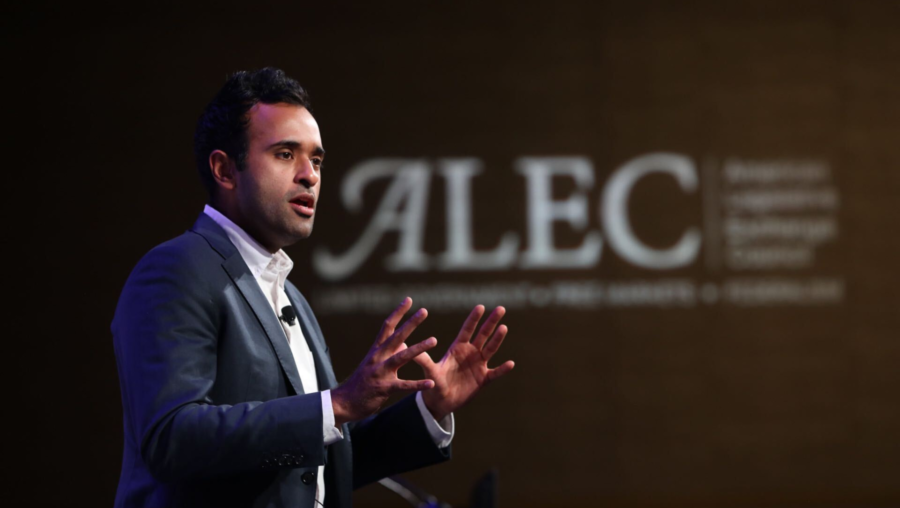 For months, right-wing politicians in the U.S. have vilified companies that are attempting to address major concerns of Americans today, including voter suppression, inequality, and climate change. Despite the Republican Party’s ostensible commitment to free markets, small government, and corporate deregulation, many of its members are laser focused on preventing companies from diversifying their leadership, taking public stands in favor of voting rights, or divesting from fossil fuels.

Politicians, think tank leaders, and media personalities on the Right are fomenting this “anti-woke” crusade in response to the impact Black Lives Matter and other social justice movements are having on companies and local governments. In 2020, Christopher Rufo, a senior fellow at the right-wing Manhattan Institute, latched onto critical race theory (CRT)—a legal framework sometimes taught in law schools—to claim that educators nationwide routinely teach it to students in grade school, making them feel guilty about systemic racism. Conservative politicians and media pundits pounced on the fabrication, riling up voters—especially parents.

When financial executive Glen Youngkin (R) won the race for governor of Virginia by pledging to ban CRT in public schools, voters didn’t seem to notice that the menace had been invented. Jubilant, the GOP took this as a sign that campaigning against CRT and other “woke” ideas works.

Their motivations are clear. Republicans want to fire up their base by exploiting cultural divides to scare voters into keeping them in office to fight the “woke” liberal agenda. For media on the Right, fearmongering, spreading conspiracy theories, and stoking outrage are profitable. For fossil fuel executives, all of these strategies could help their dying industry survive longer. For right-wing ideologues and other people in power, the crusade represents an opportunity to slow—or even reverse—progress towards justice and equity for women, people of color, and LGBTQ communities.

And for at least one finance executive, the GOP backlash against woke politics just might be a gold mine.

Earlier this year Vivek Ramaswamy, a 36-year-old biotech entrepreneur, cofounded Ohio-based Strive Asset Management to cash in on the Right’s anti-woke crusade and challenge the “Big Three” financial asset managers—Blackrock, Vanguard, and State Street—that collectively manage $20 trillion and have all committed in some way to environmental, social, and governance (ESG) investing. Those firms have pledged to consider ESG factors—along with issues of diversity, equity, and inclusion (DEI)—to judge the return on investments in light of their larger societal impact.

Companies that follow ESG principles are killing democracy and shirking their fiduciary duty to turn profits for their investors, says Ramaswamy. In his mind, anyone who wishes to invest in more sustainable ways of doing business as the climate crisis worsens is simply cynical and  imposing a woke political agenda where it isn’t wanted. Instead, Strive pledges to practice “excellence capitalism,” investing with the sole goal of making money regardless of the social and/or political consequences—however catastrophic.

Despite Ramaswamy’s belief in profits above principles, a wide range of banks, consulting firms, governmental bodies, and international authorities refute his argument—that companies are “ripping off” investors with their ESG-guided choices. They believe that asset managers have a fiduciary duty to maximize their clients’ long-term return on investments, given the huge financial risks posed by the effects of climate change. Financial giants like BlackRock that are still heavily invested in fossil fuels are beginning to shift to sustainable investing because they recognize that decreasing the severity of climate change and accurately assessing the physical and financial burden it poses are essential to managing long-term risk. The same is true for DEI principles, which are also good for business.

Strive announced a $20-million round of seed funding in May, with 11 investors buying in, according to Crunchbase. Right-wing tech mogul and avid Trump supporter Peter Thiel invested, as did Founders Fund, a venture capital firm in which he’s a partner. Among the other Strive funders is Narya Capital, another venture capital firm launched with Thiel’s seed money and cofounded by J.D. Vance, Ohio’s GOP nominee for Senate and a candidate Thiel has boosted with millions in super PAC donations.

While Ramaswamy laments the demise of democracy under woke capitalism, his wealthy ally has no use for it to begin with. In 2009, Thiel wrote, “I no longer believe that freedom and democracy are compatible.” To back that up, the billionaire investor is now one of the biggest political donors in the U.S. bankrolling the increasingly authoritarian right wing. Strive is just one of many projects he has backed in an effort to tear down America’s democratic institutions and create a parallel internet and economy for the Right.

Other Strive investors include Howard Lutnick, the billionaire CEO of trading firm Cantor Fitzgerald who hosted a big-money fundraiser for Trump in 2019; Joe Lonsdale, who cofounded Palantir with Thiel and was the first known funder of Bari Weiss’ anti-woke “university”; musician D.A. Wallach; and billionaire Bill Ackman, CEO of Pershing Square Capital Management.

Strive plans to “compete directly with the world’s largest asset managers” and to launch index funds this quarter. In offering investment options that are “very similar” to other asset managers, it reiterates that “decisions are made with the sole interest of maximizing the value of our clients’ investment accounts—with no ‘mixed motivation’ to also advance a social objective.”

The anti-woke crusade is growing as increasingly more state lawmakers pass legislation blacklisting potential government contractors who, for example, divest from fossil fuels. As conservative state treasurers organize to carry out these laws, they are seeking alternative asset managers like Ramaswamy, who is happy to oblige.

As CMD first reported, the energy task force of the American State Legislative Exchange Council (ALEC), a pay-to-play organization that brings together corporate lobbyists and mostly Republican state lawmakers to author model legislation, unanimously passed the Energy Discrimination Elimination Act last December. The model bill, pitched by the right-wing Texas Public Policy Foundation (TPPF), directs state treasurers or comptrollers to maintain a list of firms that boycott fossil fuels and ensure that each government contract with a business that has more than 10 employees includes verification that the company is not on the list of fossil fuel boycotters.

The legislation has since been introduced in 13 states and passed in four, but ALEC never made it an official model bill and has publicly distanced itself from the initiative.

Still, at ALEC’s recent annual meeting in Atlanta, the organization’s war against woke capitalism dominated discussions. Ramaswamy took the stage on July 28 to market his anti-woke enterprise just a day after giving a book talk at TPPF, where Texas Comptroller Glenn Hegar introduced him. Since Ramaswamy’s book, Woke, Inc: Inside Corporate America’s Social Justice Scam, was published earlier this year, he has been on a speaking tour sponsored by a number of right-wing organizations.

At the ALEC meeting, members considered amendments to its State Government Employee Retirement Protection Act, which first passed in March. The proposed revisions would bar anyone managing state, local, or university public pensions from weighing the climate emergency or other social or political factors when selecting investments.

Workshops at the ALEC meeting included “Less Woke, More Work—How to Protect America from the Far Left and Ignite the Economy,” “Woke Culture and Its Effect on African American Small Business Owners,” and “How States Can Fight Back Against ESG.”

Danhof directed the so-called Free Enterprise Project at NCPPR, which produces an annual Investor Value Voter Guide for right-wing shareholder activists with lists of corporate proposals to oppose, such as ones that address the climate emergency, racism, and sexism in the workplace, lobbying disclosures, reproductive health rights, and other social concerns.

NCPPR leads the Back to Neutral coalition, which includes right-wing think tanks, advocacy groups, media organizations, and two anti-LGBTQ hate groups. In May 2020, the coalition targeted Amazon after the company’s charity, Amazon Smile, blocked donations it matched from going to organizations designated by the Southern Poverty Law Center (SPLC) as hate groups. NCPPR and its coalition petitioned Amazon’s board of directors—unsuccessfully—to stop using SPLC’s hate designations to guide the company’s philanthropy.

State Treasurers Get on Board

In February, a group of Republican treasurers, auditors, and staff from 16 states got together for the annual meeting of the State Financial Officers Foundation (SFOF) to coordinate their opposition to “corporate wokeness.”

The foundation, which is closely tied to ALEC, gave awards to Ramaswamy and Andy Puzder, a former fast food executive and Trump’s failed nominee for labor secretary. As executive chairman of the board of 2ndVote Advisers, another investment firm that opposes “companies focused on political activism or social agendas,” Puzder participated in a panel discussion about solutions to ESG investing.

According to Puzder, he and Ramaswamy are friends and are considering starting a third anti-woke asset management firm. The two spoke on a panel, called “Taking on the ESG Overlords,” at the Heritage Foundation’s Resource Bank conference this spring, where Puzder promoted a bill he drafted that is very similar to the Energy Discrimination Elimination Act and “makes it clear that investing along ESG guidelines is a breach of fiduciary duties.” SFOF, the Heritage Foundation, and the TPPF all proved to be “a huge help” with the legislation, Puzder said.

“We’re hoping to get [the law] passed in a number of states” in the next year, he noted, before referencing Nebraska State Treasurer John Murante, who was in attendance. “That would enable treasurers like John to do something significant,” Puzder said.

“I really think ESG is going to be the [critical race theory] of 2023 and 2024,” Murante added later in the discussion. “When people find out about it, they are going to be absolutely livid.”