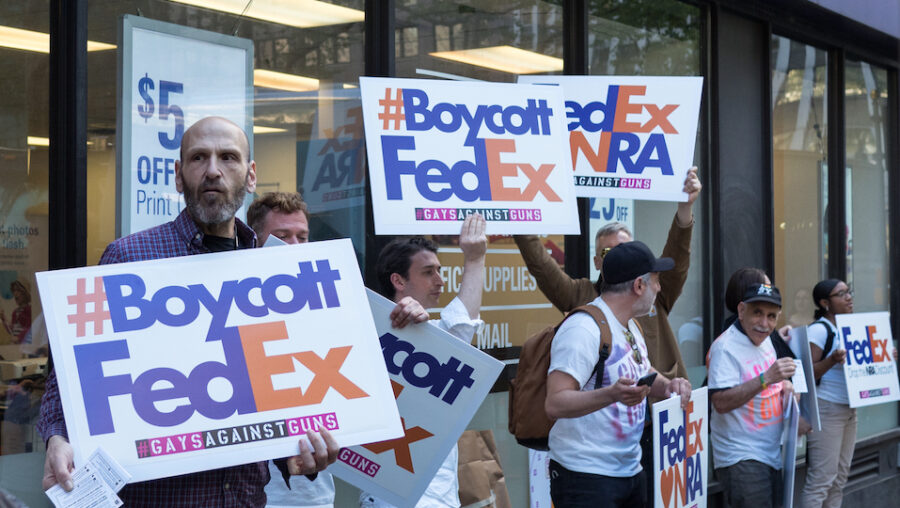 The American Legislative Exchange Council (ALEC) has quietly uploaded a sweeping model bill to its website that would require states to blacklist companies that consider anything other than maximizing profits when making business decisions.

Dubbed the Eliminate Political Boycotts Act, the bill would bar companies with 10 or more employees from receiving state contracts if they take into account any “social, political, or ideological interests” to limit their commercial relations with  fossil fuel energy, logging, mining, or agriculture–and instructs legislatures to “insert additional industries if needed.”

The radical measure would authorize states to scrutinize corporate speech for any “evidence” of illicit business considerations in a company’s “branding, advertising, statements, explanations, reports, letters to clients, communications with portfolio companies, statements of principles, or even a company’s association with “any coalition, initiative, joint statement of principles, or agreement” that the government deems improper.

The “draft” model bill is the latest in a string of proposed legislation ALEC has promoted in its fight against “woke” capitalism and business leaders who consider environmental, social, and governance (ESG) factors—along with issues of diversity, equity, and inclusion (DEI)—when evaluating the larger societal impact of their return on investments.

The new bill expands on the Energy Discrimination Elimination Act, which focuses on protecting the fossil fuel industry from boycotts. ALEC’s Environment, Environment, and Agriculture Task Force unanimously adopted that proposal last December, as the Center for Media and Democracy (CMD) first reported.

ALEC has sought to distance itself from the measure by never making it an official model bill.

Over the summer, the corporate pay-to-play group also amended its State Government Employee Retirement Protection Act at its annual meeting to hamstring public pension funds. Initially passed in March during a special meeting of its Tax and Fiscal Policy Task Force, the model policy would prohibit anyone managing state, local, or university public pensions from considering the climate emergency or other social or political factors when investing pension funds.

The Eliminate Political Boycotts Act appears to have originated from The Heritage Foundation, which posted the bill to its website in July and in August launched an anti-ESG campaign through its political arm, Heritage Action, which also hosts the bill on its site.

Heritage has played a pivotal role in organizing the campaign to demonize ESG in order to create another front in the culture war that Republicans can weaponize for political gain.

At its Resource Bank meeting last spring, Heritage gave the State Financial Officers Foundation (SFOF), a group of Republican treasurers and auditors from 23 states, a platform to promote its “anti-woke” work on three different panels and rewarded it with a $100,000 Innovation Prize for being on “the forefront of fighting the left’s push for so-called environmental, social, and governance (ESG) standards.”

Andy Puzder, a visiting fellow in business and economic freedom at Heritage, focused on “the consequences of environmental, social, and governance (ESG) activism” and revealed that he had drafted a bill very similar to ALEC’s Energy Discrimination Elimination Act that “makes it clear that investing along ESG guidelines is a breach of fiduciary duties,” CMD reported.

Heritage will be hosting the second day of an SFOF meeting next week, where attendees will participate in a three-part session on the fight against ESG and listen to a closing keynote from their favorite orator on “woke” capitalism, Vivek Ramaswamy.

The Eliminate Political Boycotts Act will be voted on behind closed doors by state lawmakers and corporate lobbyists on ALEC’s Energy, Environment and Agriculture Task Force, which meets later this month at the organization’s annual policy summit in Washington, D.C. Anti-ESG efforts will take center stage at that event, which runs from November 29–December 1.