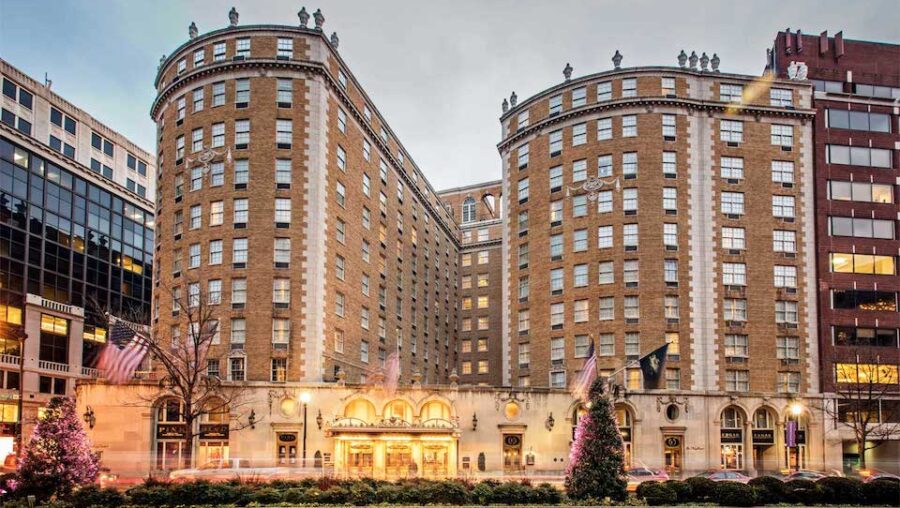 Republican treasurers, auditors, and staff from 23 states will arrive in Washington, D.C., on Nov. 13 to meet with corporate lobbyists and an array of right-wing groups during the Fall National Meeting of the State Financial Officers Foundation. Over the course of three days, they will discuss “the rising threat from China,” inflation, “true diversity,” and anti-ESG investing efforts.

The State Financial Officers Foundation (SFOF) describes itself as “the premier free-market organization” that brings together “a select group of leaders from the public and private sectors to help state financial officers develop and implement free-market, pro-growth policies.” Although SFOF is registered as a 501(c)(3) nonpartisan nonprofit and claims “it is not involved in issue advocacy on behalf of elected officials,” every single financial officer on the “team” is Republican, mostly serving in elected positions.

In mid-February, the Center for Media and Democracy (CMD) first exposed SFOF as a group on the frontlines with the American Legislative Exchange Council (ALEC) in fighting “woke” capitalism and “defend[ing] the market economy” against the growing Environmental, Social and Governance (ESG) movement among corporations to consider community interests and not just shareholders.

The meeting from Nov. 13–15 will be held at the four-star Mayflower Hotel and the office of SFOF’s close partner The Heritage Foundation, according to meeting materials obtained by CMD. More than 150 people are expected to attend.

CRC Advisors is sending the largest number of staffers of any organization, with at least nine identified by CMD. Leonard Leo, who played an integral role in Trump's effort to pack the federal judiciary with right-wing judges, founded CRC Advisors in 2020 with Greg Mueller to "funnel big money and expertise across the conservative movement."


CRC Advisors is consulting with SFOF and its members, emails obtained by CMD demonstrate. In April, CRC's Mike Martin coordinated and wrote talking points for 2022 SFOF National Chair John Murante, the state treasurer of Nebraska, for an appearance on Fox News where he attacked the current administration's energy policies with snappy quips like, "Joe Biden’s policies are sucking the energy out of Americans."

Early on the last day of the SFOF meeting, participants will be bussed to The Heritage Foundation's office a couple miles away for a three-part session on the ESG fight and a closing keynote from their favorite orator on "woke" capitalism, Vivek Ramaswamy.

Heritage has partnered with SFOF in building opposition to ESG and funding its work on the issue. At Heritage's Resource Bank meeting last spring, SFOF was given a platform to promote its work on three different panels and a $100,000 Innovation Prize for being on "the forefront of fighting the left's push for so-called environmental, social, and governance (ESG) standards."

It was at that meeting that Andy Puzder, a visiting fellow in business and economic freedom at The Heritage Foundation, revealed that he drafted a bill very similar to ALEC's Energy Discrimination Elimination Act that "makes it clear that investing along ESG guidelines is a breach of fiduciary duties," CMD reported.

SFOF, Heritage, and the Texas Public Policy Foundation  (TPPF) all proved to be "a huge help" with the legislation, Puzder said. TPPF's Jason Isaac advocated for the bill at the 2021 ALEC States and Nation Policy Summit as an "opportunity to push back against woke financial institutions that are colluding against American energy producers," CMD first exposed.

At this month's meeting, the first panel, "The Continued Battle Against ESG Investing," will feature Isaac and Kreifels with Andy Olivastro, vice president of outreach at Heritage, and Will Hild, executive director for Consumers" Research.

Led by Utah Treasurer Marlo Oaks, the second panel will tackle "Shareholder Proposals and Voting Your Proxies." Attendees will hear "how shareholder proposals are being used to advance a social agenda and what states can do to stop it" from panelists Jerry Bowyer, president of Boyer Research; Steve Milloy, a senior fellow at the Energy and Environment Legal Institute; and Scott Shepard, director of the Free Enterprise Project at The National Center for Public Policy.

The final ESG-focused discussion centers around the "Legal Argument for Fiduciary Responsibility," with Allison Ball, Kentucky's treasurer; Carmine Iaccarion, chief of staff and counsel to the Kentucky attorney general; and David Johnson, executive director of the Rule of Law Defense Fund (RLDF).

RLDF is the sister organization of the Republican Attorneys General Association (RAGA). Together with the Center for Law and Policy (CLP), RAGA runs a cash-for-influence operation that coordinates the official actions of Republican state attorneys general and sells its corporate funders access to those AGs and their staff.

Last month, Missouri Attorney General Eric Schmitt (R) announced that he and 18 other Republican attorneys general are investigating six major banks for alleged antitrust and consumer protection law violations due to ESG investing stemming from their participation in the United Nations' Net-Zero Banking Alliance. Two of the banks, JP Morgan and Wells Fargo, are sending representatives to the SFOF meeting.

The schedule for the first full day of the SFOF meeting on Monday, Nov. 14 begins with a prayer breakfast led by Ken Blackwell, chair of the Christian Right Council for National Policy's political advocacy group, before a full day of talks.

After lunch, Pennsylvania Treasurer Stacy Garrity will lead a discussion on "The Rising Threat of China and the CCP" with Jessica Anderson, executive director at Heritage Action, and Commissioner Bob Borochoff from the U.S.-China Economic and Security Review Commission. Panelists will consider questions such as "How is China's CCP working to undermine the United States?" and "What's the connection between China and ESG investing?"

ADF, designated as a hate group by the Southern Poverty Law Center, also won a $100,000 Heritage Innovation Prize at the Resource Bank meeting for its Viewpoint Diversity Score Business Index, which Tedesco is likely to promote during the discussion. The tool scores corporations based on ADF's assessment of their treatment of conservative Christian values in their business practices, workplace, charitable giving, and political spending.

On Monday evening, U.S. Senators Pat Toomey (R-PA) and Steve Daines (R-MT) will speak at SFOF's 10th Anniversary Dinner. Both senators have made the fight against "woke" capitalism a priority.

Toomey recently warned about the so-called "politicization of banks," and Daines introduced the Securing Employee Retirement Returns Act to counter the ESG movement. "Montanans should not have to pay the price for the whims of wokeness with their hard-earned life savings," Daines said. "Fiduciaries must remember their responsibility is to their shareholders, not the woke mob—these are financial institutions, not pop-up shops for the radical Left."

If the midterm elections give the GOP a majority, Republicans in Congress are likely to take on ESG investing in hearings or through legislation aimed to curb the practice.

Financial Firms Caught in the Crossfire

State laws that seek to blacklist financial firms that divest from fossil fuels are creating growing uncertainty for companies that are trying to take into consideration the financial risks of climate change. West Virginia, for example, has canceled contracts with major firms like Wells Fargo, J.P. Morgan Chase, Goldman Sachs, Morgan Stanley, and BlackRock worth hundreds of millions.

On Oct. 20, a group of 14 U.S. senators sent a letter to the CEOs of J.P. Morgan Chase and Wells Fargo calling on the corporations to end their sponsorship of SFOF in light of these actions and SFOF's role in "spreading misinformation and attempting to prevent the financial sector from freely…incorporating systemic [climate] risks."

Morgan Chase and Wells Fargo will both have two representatives at the November SFOF meeting.

In September, Responsible Investor reported that a "senior executive at Federated Hermes (UK) has said the investor will not be renewing its membership and sponsorship of the State Financial Officers Foundation."

However, the attendance list for the SFOF fall meeting indicates that four financial officers from Federated Hermes will be there, so it appears that the company is making use of its membership and sponsorship until it expires.