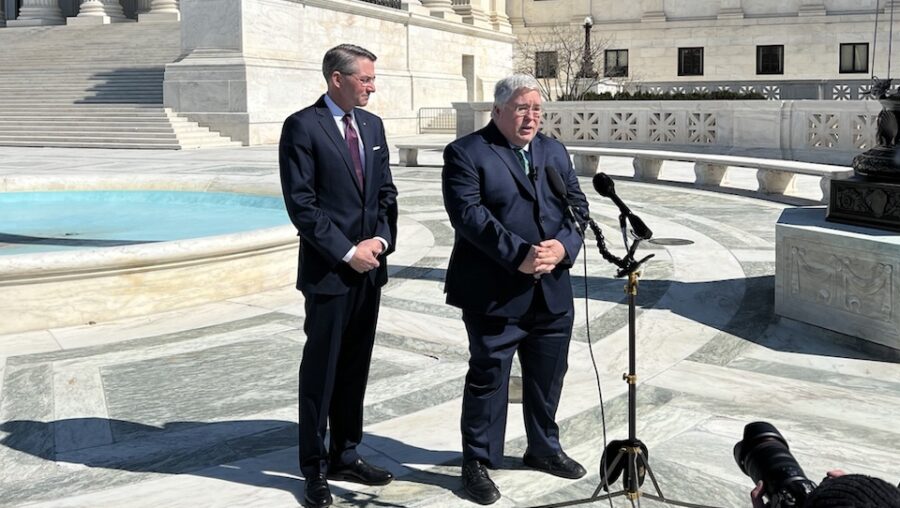 RAGA spun its fundraising figures by giving Fox Business an exclusive, claiming that it “broke another fundraising record.” But the $6.3 million figure it gave for the quarter was “across all entities,” and since 2022 IRS filings for RAGA’s sister organizations the Rule of Law Defense Fund (RLDF) and the Center for Law and Policy (CLP) will not be publicly available until November 2023 at the earliest, the Center for Media and Democracy (CMD) cannot verify the claim.

RAGA accepts unlimited contributions from corporations, individuals, and special interest groups such as Koch Industries, Altria, and the U.S. Chamber of Commerce, primarily to fund the campaigns of Republican candidates for attorneys general. Together with its affiliates RLDF and CLP, it runs a cash-for-influence operation that coordinates the official actions of Republican state attorneys general and sells its corporate funders access to those AGs and their staff.

RAGA’s largest contribution in the second quarter, $200,000, went to Brenna Bird, the Republican candidate for attorney general in Iowa, who faces an uphill battle to unseat the longest-serving state AG in the country, Tom Miller (D).

In a surprising move, RAGA gave $15,200 to Georgia AG Chris Carr’s reelection campaign. Although Carr is a Republican, he resigned as RAGA’s national chair in 2021 over the selection of Peter Bisbee to replace Adam Piper as RAGA’s executive director, citing “a significant difference of opinion… as to the direction this organization should take going forward” and “vastly opposite views of the significance of the events of January 6.”

Bisbee formerly led RLDF and, in the days prior to the deadly attack on the U.S. Capitol, he was responsible for sending out robocalls encouraging supporters to “march to the Capitol and call on Congress to stop the steal.” His selection also led to an exodus of longtime RAGA staff members, CMD reported.

Raul Labrador, the Republican candidate for attorney general in Idaho, was the only other individual to receive RAGA funding in the second quarter, accepting $5,000 for his campaign, the report discloses.

RAGA hopes to build on the 28 state offices held by Republican attorneys general through “seven-figure investments to flip seats in Wisconsin, Michigan and Nevada, and to retain the attorney general office in Arizona,” according to Fox Business.

Over the weekend, 18 companies were scheduled to attend a major RAGA fundraising event at a luxury resort in Florida, CNBC reported. Of those companies, 10 gave a total of $1.2 million to RAGA in the second quarter, CMD found.

Leading the pack was the Institute for Legal Reform (ILR), which gave another $500,000 in addition to the $255,000 it contributed in the first quarter. An affiliate of the U.S. Chamber of Commerce, ILR focuses on advancing business-friendly legal reforms such as making class-action lawsuits more difficult to file and defending business interests in court.

Following the ILR, Centene Management Company, a Missouri-based healthcare company, was the next largest RAGA donor, with a $350,000 contribution in the second quarter.

BNSF Railway and Ronald Cameron Round Out Top Five

BNSF Railway Company and Ronald Cameron, CEO of the Mountaire Corporation, each gave $150,000, making them among the top five second-quarter donors to RAGA.

Cameron is a top donor to the Koch political network. His company paid $65 million in 2021 to settle a class action lawsuit and agreed to make $140 million in investments in wastewater treatment facilities mandated by the state, CMD reported. In addition, he was the 14th largest donor to super PACs in 2021, CMD found.

According to IRS rules, “a section 501(c)(3) organization may not make a contribution to a political organization described in section 527 (such as a candidate committee, political party committee or political action committee (PAC).” As a 501(c)(3) nonprofit, Children’s Health Defense admitted the donation was illegal, but claimed that “they paid $50K to get access to Republican AGs to brief them on ‘health policy issues.'”

RAGA, a 527 registered group, refunded the $50,000 the day after the Popular Info report, its first quarter filing confirms.

Now, RAGA’s latest filing shows that it received an illegal donation of $300 from the Philanthropy Roundtable, another 501(c)(3) nonprofit chaired by Bradley Foundation President Richard Graber. The Philanthropy Roundtable was established with funding from the Institute for Educational Affairs in the 1970s to help facilitate and coordinate conservative grant-making and foundations.