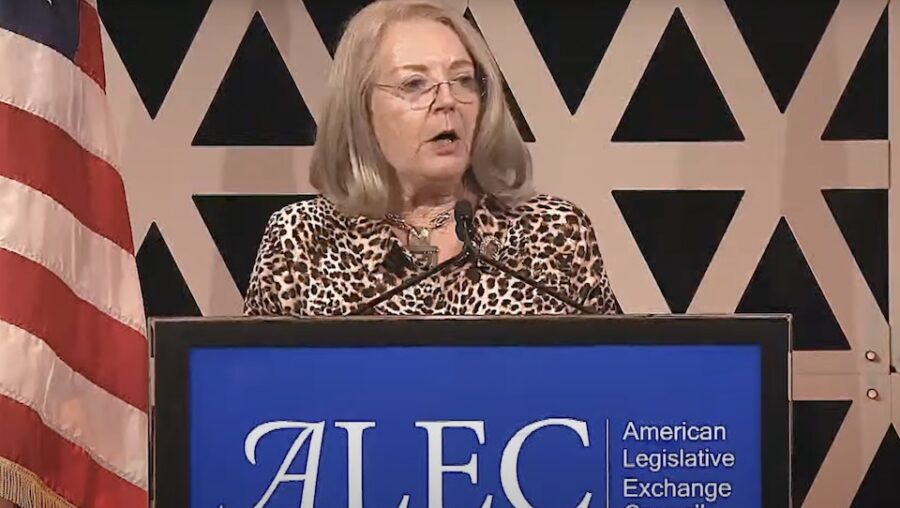 The American Legislative Exchange Council (ALEC) is honoring its national chair, Arizona Senate President Karen Fann (R), at a members-only Chairman’s Reception tonight, just a month after the Department of Justice (DOJ) subpoenaed her as part of its escalating criminal investigation of the Jan. 6 insurrection.

Fann has repeatedly called for decertifying the 2022 presidential election and last year presided over Arizona’s controversial fake election audit, which has cost taxpayers more than $500,000 so far.

The DOJ subpoena is seeking information related to Fann’s role in the plan to use fake electors to prevent then-President-elect Joe Biden from assuming office. It asks for any communications she “may have had with any member of the executive or legislative branch of the federal government; any representative or agent of Trump or his campaign; or Trump boosters Jenna Ellis, Bernard Kerik, Rudy Giuliani, Boris Epshteyn, James Troupis, Joe DiGenova, John Eastman, Joshua Findlay, Justin Clark, Kenneth Chesebro, Mike Roman or Victoria Toensing.”

The subpoena also requests communications with state Rep. Mark Finchem (R-Ariz.), an ALEC lawmaker and an integral member of the Stop the Steal effort, and other GOP operatives in Arizona. Finchem is running to become the Republican nominee for secretary of state, a position that would give him control over how the state runs its elections.

Finchem was among those scheduled to speak at the “Wild Protest” rally on Jan. 6, which preceded the attack on the Capitol he helped promote. Trump has praised him for going all in on spreading misinformation around the 2020 election.

In audio from the gathering (uploaded to Twitter by Lauren Windsor of The Undercurrent), Fann says that “the election is uncertifiable because we don’t know who won and we need to have a new election.”

NEW TAPE: AZ Senate Pres Karen Fann told us at an election integrity summit that AZ AG Mark Brnovich must go to court over the 2020 election if he verifies her audit results.

Fann said, “The election is uncertifiable bc we don’t know who won and we need to have a new election.” pic.twitter.com/OXFudbkAWa

Fann’s comments totally contradict the results of the Arizona senate’s audit—which she publicly presented herself in September 2021—showing that a hand recount of ballots confirmed Biden’s win in the Grand Canyon state. “That is a true statement. Truth is truth, numbers are numbers,” Fann said then.

Sharing Strategies on Manipulating the Vote

The relationship between Fann and Mitchell—along with their work on voter suppression—likely began through ALEC. In the summer of 2019, the pay-to-play organization secretly launched a Process Working Group to look into redistricting and how elections are run in each state. Fann is part of that group, which is chaired by Mitchell and fellow Arizona State Rep. Shawnna Bolick (R).

That group’s last known meeting was on Dec. 1, 2021—the first day of ALEC’s 2021 States and Nation Policy Summit. The agenda for that meeting obtained by CMD shows that Mitchell spoke on an “Election Day Plan” and Fann on “The Arizona Audit Story.”

In her remarks, Fann emphasized the need for ongoing election audits like those in Arizona, suggesting that they are comparable to audits of banks and government agencies.

As Arizona senate president, Fann approved the initial state payment of $150,000 for the fake audit. The partisan election review also received funds through a dark-money vehicle run by staffers with the ultra-right-wing broadcasting company One America News (OAN), which traffics in election conspiracies.

To conduct the partisan review of the election, Fann chose a fellow Stop the Steal advocate, Doug Logan, owner of an untested Florida-based company called Cyber Ninjas. The Arizona election audit turned out to be their very first.

In the weeks following the November 2020 election, Fann had frequent contact with Trump’s lawyer Rudy Giuliani, according to emails obtained by American Oversight. The same batch of records also included “one message to a constituent in late December in which Fann said she had received ‘a personal call from President Trump thanking us for pushing to prove any fraud.'”

While the audit was still underway in Arizona, Fann told CNN that the results would be “a lesson in democracy” and “the basis of a gold standard.” During the lengthy process, she hosted ALEC politicians from at least five states— including Alaska, Georgia, Pennsylvania, Virginia, and Wisconsin—who visited the audit site, CMD reported.

Fann announced last November that she will not seek reelection.

The Center for Media and Democracy (CMD) is a fiscal sponsor of Lauren Windsor’s American Family Voices.