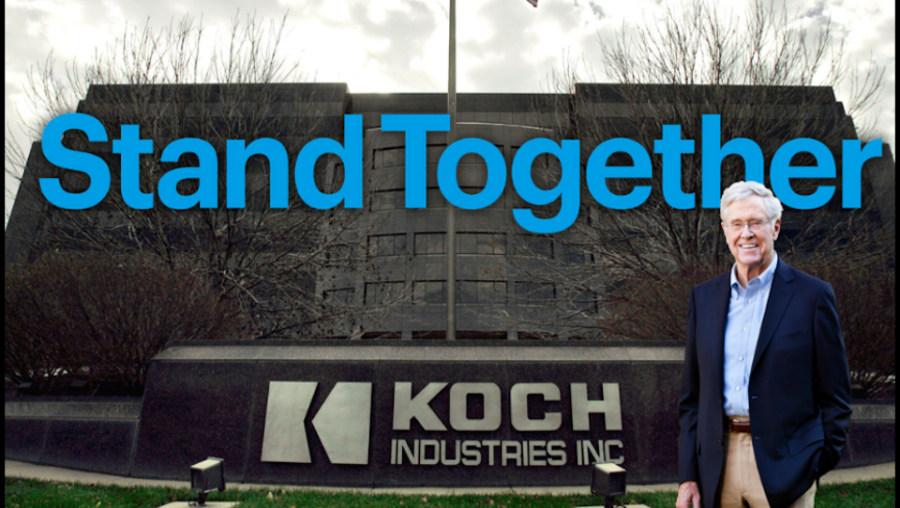 Charles Koch is unique among corporate CEOs. He controls a multibillion-dollar fleet of nonprofits that he and other wealthy business people have built into a massive influence machine over the past 20 years. This enables the Koch network to make a significant impact on U.S. courts, politics, and media, regardless of who is in the White House.

This year, Charles Koch’s political influence apparatus is undergoing yet another round of restructuring, following its recent financial growth, expansion of organizations, and new dark money grantmaking arrangements.

The Center for Media and Democracy (CMD) recently reported on the network’s ballooning revenues of $2.2 billion in 2020, the emergence of Chase Koch’s CCKC4 as a potentially major player on the U.S. political scene, and its use of the National Philanthropic Trust to hide its financial transactions.

Frequent shifts in structure often correspond with election cycles. The changes help keep Koch’s dark money organizational structure opaque, especially since IRS disclosure requirements are so antiquated that they lag behind real time by a year or more.

Most of Charles Koch’s advocacy and political organizations have operated under the Stand Together Chamber of Commerce, as of 2020, while the Charles Koch Institute (CKI) controlled most of the Koch funding vehicles. Several organizations in this Stand Together “family” have recently changed roles or started operating using trade names that differ from their legal names. 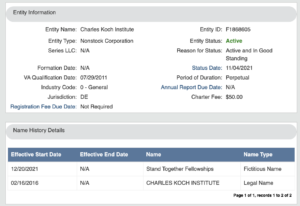 As part of the reorganization, CKI has moved its policy grantmaking operations into the 501(c)(3) Stand Together Trust and its educational programs into Stand Together Fellowships. As of 2020 (the most recently available IRS disclosures), Stand Together Trust was already increasing its role in financing groups that influence public policy. Formerly known as the Seminar Network, Inc., the Stand Together Trust slowly began granting funds to universities and policy-focused nonprofits in 2017.

Historically, the Charles Koch Foundation (CKF) had been the largest grantmaking organization controlled by the Koch family, funding climate change deniers and other organizations that influence state and federal policy. In fact, CKF and CKI have been the two largest Koch-controlled nonprofits for most of the past decade, with assets of $462 million and $364 million, respectively, at the end of 2020.

In 2020, CKF focused most of its funding on university programs, which are key to Charles Koch's strategy of manufacturing long-term policy changes. That same year, much of his politically oriented grantmaking shifted from CKF to CKI.

Stand Together Communications Replaces "In Pursuit Of"

Additionally, Stand Together Communications (listed as In Pursuit Of) received over $3 million from AFP Action, a Koch-controlled super PAC, during the 2018 and 2020 election cycles.

This shift of marketing operations to Stand Together Communications might also explain the apparent closure of G-P Studios, a media company affiliated with the Koch Industries subsidiary Georgia-Pacific. The G-P Studios website went dark in early 2022.

This year Youth Entrepreneurs, which was founded by Charles Koch and his wife Elizabeth in 1991 to give high school students business experience, has rebranded itself "Empowered."

The organization's new website and magazine share a vision of "building a community of change-making teachers rallied around the growth mindset." Favorite Koch buzzwords, like "value creation" and the idea that free markets are key to "well-being," remain central to Empowered's messaging.

The longstanding focus of Empowered has been on student training programs and curricula. Archives of the Youth Entrepreneurs website show that its programs involved vetting and grooming teachers, and offering paid incentives for participating students:

A successful YE [Youth Entrepreneurs] teacher is an inspirational motivator and entrepreneurial thinker. We can assist the district to observe teaching styles and select the best fit for our nontraditional teaching style. [...]

YE is traditionally taught as a yearlong high school elective course by teachers who have been trained on our curriculum. We offer students and alumni the opportunity to earn money for business, education or personal development purposes by participating in continuing education opportunities through YE Academy.

Recent examples of the Koch family's manipulation of education include lesson plans created several years ago by the Koch-controlled Bill of Rights Institute that whitewashed the history of slavery in the U.S. Many Koch-funded organizations have also contributed to the manufactured hysteria over the influence of critical race theory.

Koch-funded professors have authored economics textbooks that include inaccurate information related to climate change, while others in Koch-funded economics departments have taught outright denial of climate change—venturing into a scientific discipline well outside their own areas of expertise.

Another new group is Stand Together Ventures Lab (STV Lab), a for-profit operation that invests in business start-ups and helps them get established.

STV Lab works in conjunction with two limited liability companies (LLCs) disclosed in IRS tax filings of Koch-controlled organizations: STVL3, LLC and STVL6, LLC, that provide capital for the start-ups. According to its website, STV Lab is "not affiliated" with Stand Together Ventures, another Koch-run outfit that works "to supercharge organizations who innovate and disrupt the status quo" around issues like education and "cronyism in government and business."

Although the network of Koch-controlled groups has been renamed multiple times, a single brand name is often used to refer to multiple organizations.

When it was founded in 2011, the Stand Together Chamber was briefly known as the Association for American Innovation. The group became the central fundraising nonprofit for the Koch brothers' annual gathering of ultra-rich donors and political operatives, which dates back to 2003.

During each of these rebrands, the network of organizations controlled by Charles Koch used colloquial names similar to the shifting names of the 501(c)(6) organization. The network was known as Freedom Partners, and then, The Seminar Network. Now, as part of the latest marketing effort, most of these groups have adopted the deceptively progressive-sounding Stand Together brand.

A short-lived super PAC named Stand Together PAC operated briefly from 2020–22 but was administratively terminated by the Federal Election Commission (FEC) in March when it failed to file an end-of-year report.

To confuse matters, at least one Koch organization continued to operate in 2020 using an abandoned brand name: TSN Institute, an abbreviation of "The Seminar Network Institute." TSN Institute appeared to be in the process of draining its assets.

Most of these groups and companies are not differentiated to the public, though the distinctions are made clear in their respective tax filings.

Americans for Prosperity, the LIBRE Initiative, and Concerned Veterans for America

Other Koch-controlled campaigning brands like the LIBRE Initiative and Concerned Veterans for America used to be distinct nonprofit organizations. Now they are simply registered with the Virginia Corporation Commission as "fictitious names" for AFP, the AFP Foundation, and AFP Action, a super PAC regulated by the FEC. 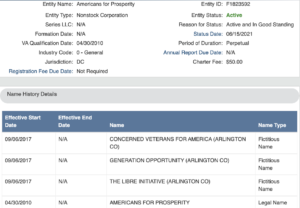 Since AFP launched the super PAC AFP Action in 2018, it has spent tens of millions of dollars on independent expenditures and electioneering, including advertising and door-to-door canvassing. AFP Action replaced the Koch brothers' previous super PAC, Freedom Partners Action Fund, which shuttered in August 2019 after its remaining funds were transferred to AFP Action.

As with Americans for Prosperity and the AFP Foundation, AFP Action acts as the super PAC for Concerned Veterans for America and the LIBRE Initiative. AFP Action’s FEC profile lists its alternative business names as CVA Action and LIBRE Action.

The visual below depicts the structure of Koch's nonprofit organizations since the most recently known changes, along with the companies and family trusts controlled by the Koch family (excluding most of the dozens of subsidiaries of Koch Industries).

Given the need to rely on a patchwork of insufficient disclosures, this is likely a partial and outdated representation. The visual includes LLCs that are not discussed in this article. It is unclear if the many other LLCs in the Koch sphere formally interact with Koch-controlled policy and political nonprofits. 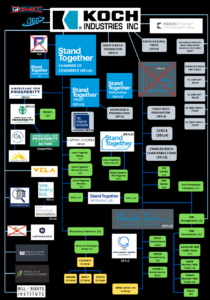