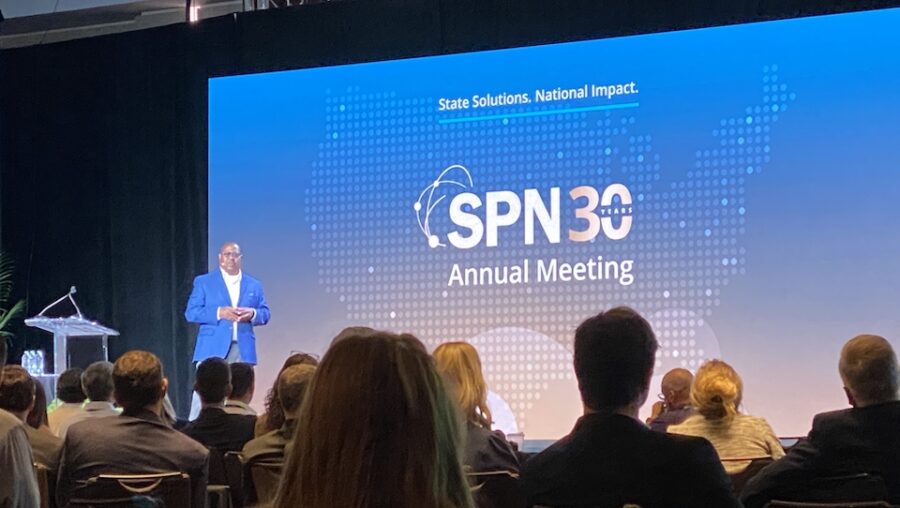 The right-wing State Policy Network (SPN) and its state-based affiliates now collectively bring in $152 million annually in revenue, according to an analysis of the most recent publicly available tax filings by the Center for Media and Democracy (CMD).

This represents a 27% increase over the $120 million CMD calculated the network brought in almost three years ago.

SPN met last week in Atlanta for its 30th Annual Meeting, where members spent four days immersed in a far-right agenda of social, political, economic, and culture war issues they hope to advance at the state level—in resistance to “federal overreach.”

SPN groups play an integral role in making sure that legislation gets passed in state houses—by providing academic legitimacy when called upon to testify at hearings, producing “studies” or model legislation, and attracting media attention. That legislation is sometimes drafted as model bills by corporate lobbyists and lawmakers at SPN’s sister organization, the American Legislative Exchange Council (ALEC).

SPN currently has 64 affiliate members, along with 99 associate members that include many prominent national right-wing groups—from Charles Koch’s Americans for Prosperity (AFP) to the Heritage Foundation, as well as one of the network’s largest funders: DonorsTrust.

In 2020 alone, SPN and 45 of its affiliates received $15.1 million in contributions from DonorsTrust, the preferred donor conduit of the Koch political network, CMD reported.

The $152 million in revenue does not include contributions to advocacy or litigation arms of SPN, which would add millions more to the total.

As CMD first exposed, SPN is working to expand its litigation capacity with its “incubated” American Juris Link, a right-wing legal center launched in 2019 to actively track and support challenges to Covid-19 health restrictions, fight workers’ rights to unionize, and coordinate strategies and amici to counter progressive proposals and champion far-right causes.

The Texas Public Policy Foundation (TPPF) outraised SPN's 63 other affiliate members with $17.7 million in revenue in 2020, an IRS filing obtained by CMD details. TPPF brought in $7 million more than the Foundation for Government Accountability (FGA), an SPN affiliate in Florida that was the only other main member to raise more than $10 million.

Last year, Life:Powered Director Jason Isaac lobbied ALEC lawmakers to pass the Energy Discrimination Elimination Act at its December 2021 meeting, writing that the energy bill was an "opportunity to push back against woke financial institutions that are colluding against American energy producers." He accused banks and investment firms that decide to divest from and deny loans to fossil fuel companies of using "politically motivated and discriminatory investing practices," CMD first reported.

The next largest donors identified are the Deason Foundation ($1.9 million), the family charity of Texas GOP megadonors Doug and Darwin Deason, Searle Freedom Trust ($1.5 million), and the Bradley Foundation ($865,000).

The Koch's Stand Together Trust, AFP, and i360, along with the Walton Family Foundation (run by the owners of Walmart) are among those listed as sponsors.

HEP sponsored a talk for members led by its executive director Jason Snead and the James Madison Institute's Sal Nuzzo, who shared "fresh research data from focus groups and polling [that] will help you understand the various viewpoints on issues ranging from voter identification requirements to rank choice voting."

Snead then joined Robert Alt, president and CEO of The Buckeye Institute; O.H. Skinner, executive director of Alliance for Consumers; and Scott Walter, president of the Capital Research Center, to discuss "How Lawyers, Lawsuits, and Unlimited Money Are Impacting Policy and Elections." The right-wing, online election tracker Ballotpedia also sponsored and led a panel on the "Changing Landscape of America's School Board Elections."

Although SFOF is a registered 501(c)(3) nonprofit and claims that "it is not involved in issue advocacy on behalf of elected officials," its "team" is solely composed of Republican financial officers, most of whom serve in elected positions, CMD first exposed.

"I really think ESG is going to be the [critical race theory] of 2023 and 2024," Murante said when speaking at a Heritage Foundation meeting earlier this year. "When people find out about it, they are going to be absolutely livid."

Under the guise of "workplace freedom," anti-union activists from the Mackinac Center, Empire Center, Illinois Policy Institute, and Institute for the American Worker presented "new solutions to the country's evolving workplace and union issues."

SPN and its members systematically spearhead attacks on unions and workers in statehouses and courtrooms nationwide with the goal of decimating the union movement. It also played a leading role in the 2018 Supreme Court decision in Janus v. AFSCME, which resulted in unions no longer being able to require members to pay "fair share" fees to cover the cost of bargaining for better wages, benefits, and working conditions.

In "So You Passed Education Savings Accounts [ESAs]. Now What?," SPN meeting attendees heard from school privatization advocates from the Children's Scholarship Fund New Hampshire, the Cardinal Institute, ExcelinEd, and Love Your School, who spoke about "key components of ESA legislation that make implementation easier."

ESAs work like school vouchers in that they siphon off public taxpayer money to support private and religious schools. School privatization advocates created them as a workaround to constitutional prohibitions on the use of taxes to pay for religious schools.