› Featured Investigations › ULINE CEO Pours Another $7.1 Million Into His Restoration PAC to Boost Anti-Abortion and Right-Wing Candidates and Causes 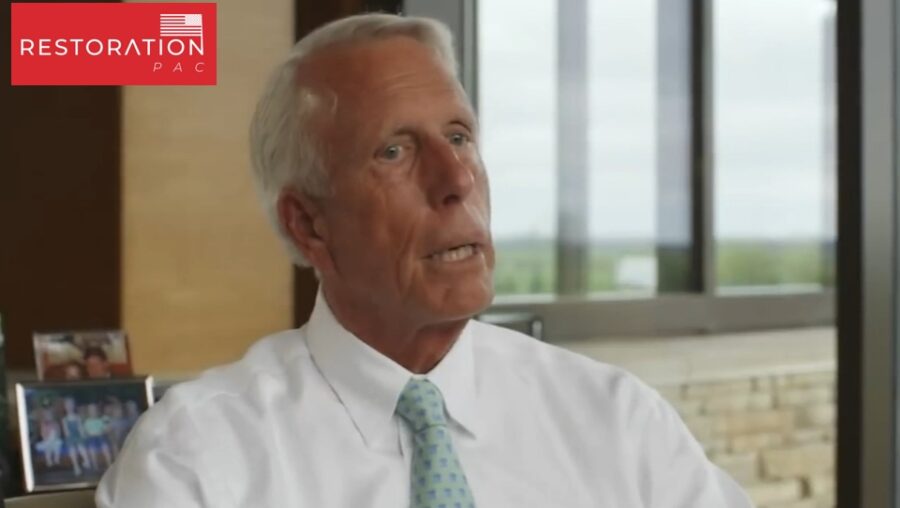 Republican megadonor and ULINE CEO Richard Uihlein injected his Restoration PAC with another $7.1 million between July and September to help elect right-wing Republicans, bringing his total funding for the super PAC this cycle to $20.8 million, 97% of its total revenues.

Restoration PAC used those new funds to donate $6.5 million to anti-abortion groups and right-wing, state-based campaigns, and spent $300,000 to fight the U.S. Senate races of incumbent senators Mark Kelly (D-Ariz) and Catherine Cortez Masto (R-Nev.), along with candidate Mandela Barnes (D-Wisc.), according to a quarterly report filed on October 15 with the Federal Elections Commission (FEC).

“Restoration PAC engages in elections, provides support to truly conservative candidates, and opposes Leftists and the woke agenda,” according to its website.

Restoration PAC has raised $21.5 million and dispersed $22.7 million so far this election cycle. The $7.1 million from Uihlein in the third quarter was made in four installments, with another four donors chipping in a total of less than $31,000, according to the filing.

Having spent $54.2 million so far, Uihlein is currently the top Republican donor in the federal midterm elections, OpenSecrets reports. He and his wife Elizabeth ranked as the fourth largest donors to super PACs in 2021, according to a Center for Media and Democracy (CMD) analysis of FEC data.

The billionaire couple has also distributed millions in grants through the Ed Uihlein Family Foundation to support right-wing infrastructure. In addition, Richard is a major funder of Club for Growth and gave $9 million to help Darren Bailey, a far-right state senator endorsed by former President Trump, win the GOP primary in the Illinois governor’s race.

Forbes estimates the Uihleins, owners of Uline shipping supply company in Pleasant Prairie, Wisconsin, to be worth $8 billion.

$3.4 million to Women Speak Out PAC

In the third quarter, Restoration PAC doled out $3.4 million to Susan B. Anthony Pro-Life America‘s anti-abortion Women Speak Out PAC. This represents a substantial increase in funding from the $437,778 it gave in the second quarter, on top of the $219,000 it contributed in the first quarter.

On its website Women Speak Out PAC indicates that it is focusing on eight states this cycle. Many of its ads attempt to portray Democrats as extremists who support late-term abortion up until birth, while Republicans favor reasonable regulations. This blurring of reality helps to detract from the fact that the “ultimate goal” for Susan B. Anthony’s Pro-Life America “is to end abortion in this country.”

As of the end of August, Women Speak Out PAC had received $6.7 million in contributions this cycle, FEC filings show.

Restoration PAC disclosed another $950,000 in donations to the American Principles Project’s political action committee in the third quarter. This follows $1.25 million in contributions to the PAC in the second quarter, in addition to the $650,000 Restoration gave it in the first quarter.

Frank Cannon, a longtime political strategist for Susan B. Anthony Pro-Life America, runs American Principles Project. In March, CMD exposed his strategy for improving Republicans’ chances to win big in the November midterms, which he divulged at the February meeting of the Council for National Policy (CNP).

FEC filings show that American Principles Project has not yet spent anything on federal general elections but has spent over $2 million on advertising and mailers in state races.

The Iowa-based Americas PAC received another $650,000 from Restoration PAC in the third quarter, in addition to the $650,000 it received in the first quarter, the FEC report details.

This cycle Uihlein has again almost fully funded Americas PAC through Restoration PAC and Restoration Action, just as it did during the 2020 election cycle, as OpenSecrets reported.

The Americas PAC website indicates that it targets Hispanic and Black communities with ads “supporting free market candidates and Republican principles,” but FEC filings show that it has not yet placed ads in federal general elections this year.

Fair Courts America received $375,000 from Restoration PAC in the third quarter, in addition to the $266,000 it received in the second quarter. Some of this funding appears to be in the form of loans, according to FEC disclosures.

“Progressive activists seek to take control of the courts away from the people, to enact a liberal agenda resulting in violence and crime in our communities and creating victims of our neighbors,” the organization claims on its website. “Fair Courts America is committed to standing against this tide, uniting voters across the political spectrum, and restoring America’s courts to their original purpose.”

Fair Courts America disclosed spending $250,000 to defeat Wisconsin Gov. Tony Evers” appointee, Lori Kornblum, in the April election for Wisconsin’s District II Court of Appeals, and another $67,000 in Arkansas, according to FEC filings.

The Uihlein PAC supported Will Jones, who beat Alicia Walton for prosecuting attorney in the Sixth Judicial District in Arkansas, The Arkansas Times reported.

Ronald Cameron, CEO of the Arkansas-based Mountaire Corp, is the only other known contributor to Fair Courts America, giving $100,000 in May.

Restoration PAC is fully funding Western Conservatives’ political action committee to the tune of $360,000 for a campaign to attack selected state Republican candidates and other individuals as “RINOS” (Republicans in Name Only) and others as not far Right enough.

Karakoulakis is a lobbyist for the Conservative Energy Network, and the treasurer of its advocacy group, Conservatives for a Clean Energy Future.

Stampede America, an ex-military canvassing and get-out-the-vote outfit, received $328,000 from Restoration PAC in the third quarter for “grassroots activity.”

Restoration PAC contributed another $280,000 in the third quarter to the Election Integrity PAC, founded earlier this year and run by Jennifer Gross, vice president of administration for Susan B. Anthony Pro-Life America.

Since it already funneled $847,000 to the group in the second quarter, this brings the total of Restoration PAC’s 2022 contributions to Election Integrity PAC to over $1 million so far.

In other words, Uihlein’s PAC appears to be fully funding Election Integrity PAC, but since the latter reports its receipts monthly versus quarterly, filings with the FEC only show $847,000 in receipts through August.

So far this year, Election Integrity PAC has spent more than $600,000 on robocalls, texting, polling, and direct mail in Arizona, Georgia, Kansas, Michigan, and Wisconsin, according to FEC filings. It has also donated $100,000 to the Arizona Free Enterprise club and $50,000 to the Republican State Leadership Committee (RSLC).

Restoration PAC was also listed as a Platinum-level sponsor of RNLA’s annual National Election Law Seminar, which was held in August this year in Phoenix and featured notorious voter suppression advocates Christian Adams, president and general counsel of the Public Interest Legal Foundation; Hans A. von Spakovsky, a senior legal fellow at The Heritage Foundation; and Jason Snead, executive director of the Honest Elections Project.

Uihlein’s PAC also contributed $13,000 to Awake IL, an advocacy group working to defeat Amendment 1, which would enshrine in the Illinois Constitution workers’ rights to collectively bargain for “the purpose of negotiating wages, hours, and working conditions, and to protect their economic welfare and safety at work.”

The group is led by Shannon Adcock, who also chairs the dark money group Moms for Liberty–Dupage and is a candidate for the School Board of Indian Prairie School District 204.