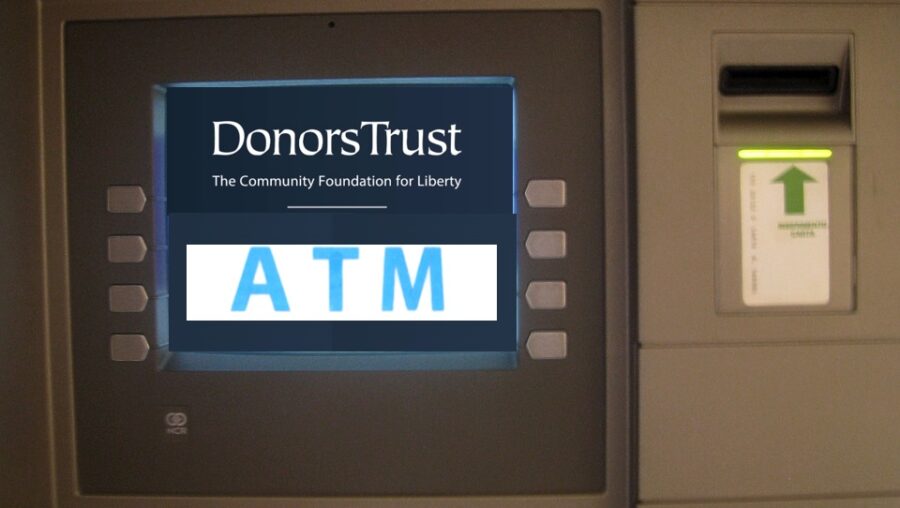 The $123 million in distributions is down $14 million from 2020, the Center for Media and Democracy (CMD) has calculated.

DonorsTrust brought in over $1 billion, bringing its total net assets to $1.5 billion. Most of that money came in the form of two large donations of $427 million and $426 million in stocks, Politico first reported.

As a registered 501(c)(3) nonprofit “charity,” DonorsTrust is not required to disclose the identities of its funders.

Donors Capital Fund, a sister organization of DonorsTrust, received no contributions and now has less than $12 million in net assets.

$87 Million to Prop Up Right-Wing Infrastructure

The largest grant of $17.1 million went to The 85 Fund, Leonard Leo’s well-funded 501(c)(3) nonprofit connected to a powerful network of dark money right-wing groups that influenced the shaping of the federal judiciary during Donald Trump‘s presidency and has promoted voter suppression through its Honest Elections Project.

The second largest DonorsTrust grant of $5.9 million went to Consumers’ Research, which launched a million-dollar “Consumers First Initiative” in 2021 to “name and shame” corporations that the group deems to be “playing woke politics.” Consumers’ Research is a close partner of the State Financial Officers Foundation, a group of Republican treasurers and auditors from 23 states weaponized to fight ESG investing and “woke” capitalism.

Another $19.7 million went to the State Policy Network (SPN) and its state affiliates or main members.

SPN is a web of right-wing “think tanks” and tax-exempt organizations in 50 states, Washington, D.C., Canada, and the United Kingdom. DonorsTrust gave close to half of this amount, $9 million, to the national SPN organization. SPN raised $24.8 million in 2021, according to its latest IRS filing obtained by CMD.

SPN groups play an integral role in making sure that legislation gets passed in state houses by providing academic legitimacy when called upon to testify at hearings, producing “studies” or model legislation, and attracting media attention. That legislation is sometimes drafted as model bills by corporate lobbyists and lawmakers at SPN’s sister organization, the American Legislative Exchange Council (ALEC).

In September, CMD found that the national umbrella organization SPN and its state-based affiliates now collectively bring in $152 million annually in revenue.

Forty-six of the 64 affiliate members received DonorsTrust and Donors Capital Fund cash in 2021, with Michigan’s Mackinac Center topping all of the groups with $2.8 million from DonorsTrust.

Franklin publishes The Center Square, a rebrand of its predecessor Watchdog.org.

The Constitutional Defense Fund topped all grantees with $3.8 million.

The Institute for Justice, a long-time litigator and amicus filer on the right, received the next largest grant of $1.3 million.

Notably, the Center for Law and Policy, the Republican Attorneys General Association’s newest weapon in its arsenal of pay-to-play groups designed to influence state attorneys general and national policy, received its first known grants of $250,000 and $100,000 (through its registered name of Rule of Law Endowment) from DonorsTrust. CMD first reported on the new nonprofit in October of 2021.

DonorsTrust again supported efforts of the climate denial machine with $3.5 million in grants in 2021.

The Heartland Institute, an Illinois-based climate denial group, topped all groups in receiving $935,000 from DonorsTrust. Heartland hosts an annual gathering of climate denialists along with promoting misinformation around the climate emergency. The title of its 2023 conference is “The True Crisis: Climate Change or Climate Policy.”

The next largest grant of $816,000 went to the Competitive Enterprise Institute (CEI), an advocacy group based in Washington, D.C. with long ties to tobacco disinformation campaigns and climate change denial.

“CEI has been instrumental in fighting decades of climate alarmism and anti-energy policies that constrict energy supplies, raise prices, and stoke unjustified pessimism about human adaptive capabilities,” it states on its website.

Leading those groups with a $1 million grant was America’s Future, which holds local and national networking events for young right-wingers.

DonorsTrust gave the second largest grant of $709,000 to insurrectionist Charlie Kirk’s Turning Point USA. The group funnels money to right-wing candidates for student government at universities across the country and has faced numerous allegations of racial discrimination.

A 2021 investor prospectus obtained and published by CMD revealed that TPUSA was seeking $43 million for a seven-prong plan to "win the American Culture War and to inspire our kids [to] love America again."

$3 Million to Hate and Pro-Gun Groups

Despite negative attention, DonorsTrust again funneled $3.2 million to hate and pro-gun groups in 2021.